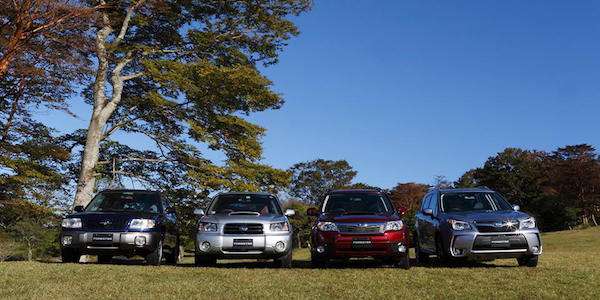 Subaru Forester Turns 20; Is the Small SUV Losing its Luster?

The first generation Subaru Forester made its debut 20 years ago in Japan this year. Is the Forester SUV losing its luster?
Advertisement

The 2017 Subaru Forester is no longer a teenager, it turns 20 this year. Is the small SUV getting old and losing some of its luster? The first generation Subaru Forester rolled off the assembly line in Gunma Japan 20 years ago. The compact crossover has been manufactured by Fuji Heavy Industries and sold under the Subaru brand since 1997.

The 2017 Subaru Forester is now the second-best selling vehicle in Subaru’s lineup. The Outback wagon has passed Forester and is number one in sales in the US. Is Forester losing its appeal? Here’s the Forester’s history and where it’s going.

Forester made its global debut at the Tokyo Motor Show in 1995 as the Streega Concept and made its way to production in February 1997. The first Subaru Forester made its way to the U.S. in 1998 and was offered with all-wheel-drive, a 5-speed manual transmission and a 2.5-liter boxer engine producing 165 horsepower and 162 lb. ft of torque.

The compact SUV rode on the Impreza platform but it featured a taller stance, higher H-point seating, and Subaru’s all-wheel-drive system. The second generation was introduced in 2003 at the Chicago Auto Show and came with a number of weight-reducing refinements like an aluminum hood, perforated roof rails and hydro-formed front sub frame. In 2004 the Forester XT turbo model was released.

The third generation Forester launched in 2008 and made its North American debut at the North American International Auto Show in Detroit that same year. Forester's wheelbase grew by 3.5 inches, with overall increases of 3.0 inches in length, 1.8 inches in width and 4.3 inches in height. The compact SUV also saw a redesigned exterior and received a sloping roof line and more cargo space.

The fourth generation Forester was introduced in 2014 and received a major redesign from the ground up. Subaru reengineered the small SUV with the latest technology, and it’s still the safest mid-size SUV on the planet. With the fourth generation model, Subaru stayed true to their core values of good visibility, cargo carrying ability and versatility. The 2017 Subaru Forester is as popular as ever, but with any model, it begins to get a few aging signs.

More on Page 2: Fifth generation is coming next year

The fifth generation Subaru Forester will get a complete remodel for the 2019 model year and will arrive next year. The Forester will get a complete overhaul and will ride on the new Subaru Global Platform, which should breathe new life into the small SUV. It will come with new exterior styling, get a more comfortable cabin, will get improved fuel economy with a new-generation power plant, improved driving dynamics, and improved safety features.

The 2017 Subaru Forester may have lost its number one position in the lineup to the Outback wagon, but look for it to regain its sizzle as one of the most popular small SUVs in America when the fifth-generation model arrives next year. Stay tuned.

Cornelia wrote on December 22, 2020 - 9:42pm Permalink
I bought my Forrester used 10 years ago with over 100k miles on it. She is still going with over 200k on her now. I need to speak to a Subaru rep/officer. I love my car, having a repeated issue . Can you send my request to right person ? Very much appreciated Cornelia