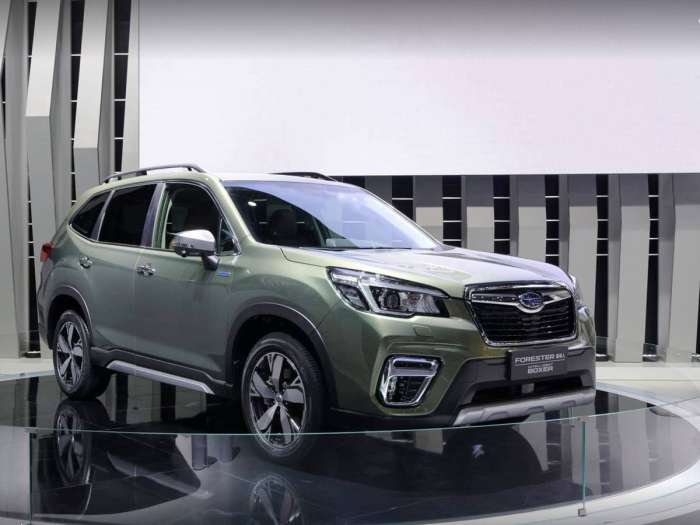 Subaru Forester e-Boxer Hybrid Coming in 2019; Outback Hybrid is Next

Subaru will launch the new Forester Hybrid in 2019. It’s going to Europe and Australia, but what about the US?
Advertisement

Subaru Corporation is getting ready to launch the new 2019 Forester eBoxer Hybrid in Japan, and speaking with Motoring at the launch of the all-new Forester in Japan this week, Subaru Australia managing director Colin Christie said the new Forester Hybrid will launch in Australia next year and is also heading to Europe.

Christie says, “The move towards electrification means we’ll have a hybrid Forester in the market by the end of next year, and a second hybrid model shortly after that in early 2020. It’s the first hybrid for Subaru in Oz and we’re really excited about it.”

The e-BOXER hybrid system could also be available in the new Outback within the next 18 to 24 months according to the report. Subaru is launching their first-ever new 2019 Crosstrek plug-in-hybrid later this year in the U.S. market. But it’s unclear if the U.S. will get the Forester e-Boxer hybrid model.

We do know Subaru is not developing an all-new model and using their existing model lineup for their hybrid models. “It makes sense that our hybrid models are in packages that everybody knows and understands, and not a completely standalone product,” Christie continued.

Subaru is expected to launch an all-electric model by the year 2022. “If electric vehicles are only a few years behind our mild-hybrid (e-Boxer) range, then I could see us moving from the mild hybrid variants straight into an electric vehicle at some point in time.”

Incoming Subaru President Tomomi Nakamura is counting on the redesigned fifth-generation Forester to stoke U.S. sales and help rebuild the brand's tarnished image at home. The all-new 2019 Subaru Forester e-Boxer Hybrid is launching in Japan now, and Australia and Europe next year. The e-Boxer hybrid system could also be available in the new-generation Outback in early 2020. Subaru has not confirmed whether the U.S. consumers will get these models.

Don Norush wrote on July 12, 2018 - 1:18pm Permalink
It is puzzling to learn that Subaru will NOT make the hybrid Forester available in US!
Daniel R. Watkins wrote on July 17, 2018 - 4:27pm Permalink
E-boxer ... mild hybrid... still has the driveshaft for the rear wheels. Pass. Hopefully the Crosstrek hybrid will be electrically rear driven.
Gary Wright wrote on July 29, 2018 - 7:32pm Permalink
You make a 2019 hybrid in the Forrester and I will buy one
A wrote on November 3, 2018 - 8:50pm Permalink
I totally agree! I'm so puzzled why there are so few electric models available in any brand, and why not integrate a hybrid Forester in the U.S. markets? I feel like Americans are forced to drive so much more than Europeans and we're ready to be energy efficient. It's very frustrating as a consumer to be blocked from the hybrid option.
Luis carcoba wrote on September 13, 2018 - 2:09pm Permalink
Why do the new Subaru hybrid cars go to other places before the US? I would buy a Hybrid Forester if it gets significantly higher gas mileage per gallon. Not two or three miles to the gallon, as was the case on the previous attempt with the Crosstrek Hybrid years ago. And if it is not four thousand dollars more on the sticker price.
Karen Wojcik wrote on November 25, 2018 - 9:00am Permalink
I will not buy a new Subaru Forester until they have a HYBRID version!!! I amready to buy NOW but i am waiting for the company to move away - permanently - from fossil fueled vehicles!!! We need to work together to save our planet!!!
Torgeir Aune wrote on December 2, 2018 - 4:58pm Permalink
I need a new car now, and I'm sorry to say I have to turn to Volvo.
Eliz wrote on March 11, 2019 - 12:18pm Permalink
I too, would buy a hybrid Forester if offered here in the US. If there isn't one in the next couple of years, will go with my 2nd choice, Toyota RAV4 hybrid. MPG matters to me. Slowly shopping to replace an aging Toyota.
Pema wrote on May 1, 2019 - 2:06pm Permalink
Im upset that Subaru isn't brining the FORESTER HYBRID HERE FIRST WHY?? We have such slim efficient options already! Be smart Subaru and bring an efficient Forester hybrid to the USA!
Sophia wrote on May 12, 2019 - 12:35pm Permalink
Looking to lease a hybrid and really wanted to consider a Subaru this year. I am with all these folks, why isn’t there more hybrids available for us in the states? There are several high end hybrids available but these are not in my range! I’m ready for a Subaru but Subaru is not ready for me.
V.J.. wrote on May 14, 2019 - 1:33am Permalink
I agree with the others who would prefer to buy the Subaru Forester Hybrid but may have to settle for the Rav4 hybrid. I'm a Toyota Prius owner for one reason - mileage. And would now like to include an SUV hybrid and for many reasons - including body design with more window space - prefer the Forester.
Tim wrote on May 27, 2019 - 2:51am Permalink
I am from Canada, can’t wait to see forester eboxer
H McIntosh wrote on July 17, 2019 - 7:28pm Permalink
I understand that it is expensive R&D for a small car company to develop hybrid & electric technology. But I am driving my 3rd Subaru. If they are developing hybrid tech and not releasing it in North America, I will not be buying a 4th.
Bruce wrote on March 6, 2020 - 11:13pm Permalink
If you bring a Hybrid Forester to the US we will buy one also. Really want a Forester, but it must be a hybrid.