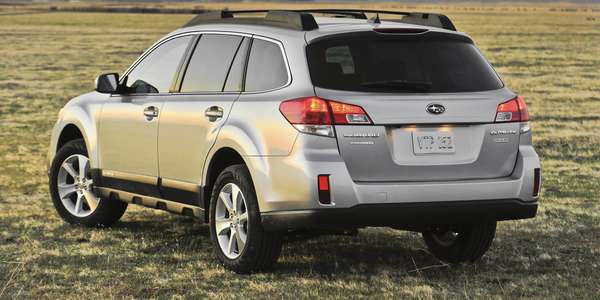 Subaru Drops Significantly in Consumer Reports Reliability Ratings; is the Helium Coming Out of the Balloon?

In the recent Consumer Reports Reliability ratings, Subaru drops out of the top 10. Is the Helium Coming Out of the Balloon?
Advertisement

The Subaru brand drops significantly in the recent Consumer Reports Reliability ratings. They single out the Subaru Outback, Legacy and WRX/STI for declining reliability. They weren’t the only automaker to drop as Volvo and Volkswagen also has big drops in rankings. What’s going on with these brands?

Subaru has a small model lineup of only seven automobiles with the Forester, Outback, Crosstrek, Impreza, WRX/STI, Legacy and BRZ. So as CR points out, if one or two models suffer a drop in reliability, it has big ramifications. Three of Subaru’s vehicles dropped which hurts them more than other brands. But CR seems to be speaking out of both sides of their mouth.

Consumer Reports says Subaru has dropped out of their “More Reliable” rankings this year and now are listed as “Reliable”. CR says Subaru dropped out of the top 10 reliable brands because of “multiple problems in the Legacy sedan and Outback wagon”, which both now have average reliability.

WRX and WRX STI falls out of favor

CR says the Subaru Outback wagon scores average in noises and leaks and in-car electronics. It rates the Subaru Legacy average in only one category, power equipment. The Subaru ranking was further hurt by the WRX and WRX STI performance sedans which fell to “below average” reliability. CR rated the WRX/STI average in the “ minor engine” area and low in noises/leaks.

Yet all three vehicles are “Recommended Vehicles” by Consumer Reports in their November New Cars Preview 2017 magazine. This means CR says all three, Outback, Legacy and WRX/STI meet their stringent testing and “have average or better reliability” and performed well in their testing.

So the Consumer Reports Reliability Report is a little confusing when it seems they are speaking out of both sides of their mouth. First they dropped Subaru out of the top-ten rankings in reliability, but then they put the Subaru Outback, Subaru Legacy and the Subaru WRX/STI, all vehicles singled out for issues, on their “Recommended Vehicles” by Consumer Reports list.

If you are looking to purchase a 2017 Subaru Outback, Legacy sedan or WRX/STI performance car, the Consumer Reports rankings can be a bit misleading. Look closely at the total picture and then decide for yourself. By-the-way, Consumer Reports also includes the 2017 Subaru Forester SUV, Crosstrek crossover and BRZ sports coupe on their “Recommended Vehicles” list.

Mark Day wrote on October 26, 2016 - 10:17pm Permalink
Subaru has had major engine oil consumption issues leading to lawsuits. I'm not aware of this problem being identified in Consumer Reports. Their Subaru ratings are dubious.
Kevin Tear wrote on January 3, 2017 - 9:49pm Permalink
They also bundle the WRX and STI in one review, despite wildly different engines, suspension, brakes, optional packages and fuel economies. Almost every qualm they produce for the WRX is actually an issue with the STI; the turbo lag, irritating stock shifter, uncomfortable suspension... the WRX handles potholes like a dream, so it's discerning there. The WRX is also very quiet, and is often criticized with the new engine of getting rid of the old boxer rumble, but to criticize a boxer engine of having rumble is like criticizing a rotary engine for not lasting 200k miles, regardless. Lastly, the WRX uses a basic cable link with relatively long throws while the STI uses a mechanical gearbox with short shifts, but both are at the mercy of emissions standards, which is why the BPV and electronic rev meter act in the way they do without a tune. In any new manual, high performance vehicle, you are going to see rev hang due to emissions standards, and it's not fair to justify that as a symptom of the car itself... if you care, you need to get a tune. I can shift perfectly smooth in my car.
Leonard's Shorts wrote on March 7, 2020 - 2:41pm Permalink
Subaru is back in Consumer Report's top 10 - Legacy & Forester. This is absolutely ridiculous given the ongoing problems Subaru owners are still experiencing. Although I have had a Cons.Reports sub. for many,many years - I really take their top 10 car awards with a grain (read: bag) of sand. There's no damn way I would want to buy a car that has repeated windshield issues, even after being fixed. ----------------------- I'm going to reach out to Consumer Reports and seek answers, because frankly their decisions making skills (based on their own purchased cars and owner satisfaction surveys?) don't amount to a hill of beans. The fact that they don't even mention these issues in their magazine is just mind boggling.