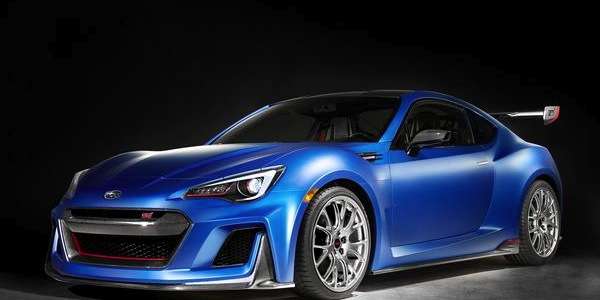 STI President talks to Motoring.com.au about more stand alone STIs and says a Subaru BRZ STI is in the works.
Advertisement

When Subaru Tecnica International (STI) unveiled the BRZ STI Concept at the 2015 New York International Auto Show, it was the global launch of the STI brand and signaled new STI models were coming. At the Tokyo Motor Show this week, STI launched a new 2016 WRX STI S207 for the Japan market and STI’s boss spoke with Motoring.com.au about future plans for Subaru’s motorsport division.

Subaru Tecnica International (STI) President, Yoshio Hirakawa told Motoring.com.au he wants to see more stand alone STIs and says a Subaru BRZ STI is in their plans. Hirakawa told them, “It’s my dream to make STI a global brand” and more vehicles like a BRZ STI are the key to making it happen.

The Subaru lineup currently has only one series production STI product, the popular 2016 WRX STI performance sedan. BRZ fans have been asking for a more powerful sports coupe since its launch in 2012 and it could be getting closer to becoming reality. Don’t count on a turbo BRZ just yet.

At the Tokyo Motor Show, Hirakawa told Motoring.com.au the number of stand alone Subaru STI models could triple in the next year and that four models could be coming soon. One of those models is likely a BRZ STI performance coupe. Hirakawa “controversially” confirmed STI engineers are working on potential advanced technology that could make a BRZ STI a reality.

Subaru has always been a conservative company and they won’t produce a BRZ that will change the crash test scores. BRZ is an IIHS top safety pick and that’s very important to the brand as safety is one of their core values they won’t compromise. Hirakawa says until now, Subaru has ruled out a turbocharged version of the BRZ sports coupe because of turbo, intercooler and crash test incompatibilities.

What could be coming is a new electrically powered turbocharger that is “one option to overcome these challenges” that STI is looking at for the BRZ says Hirakawa. Subaru stated at the 2015 New York International Auto Show that more STI models were coming and it looks like a series production BRZ STI will be coming soon. Stay tuned.

Nick wrote on December 2, 2015 - 6:52am Permalink
If they come out with the sti that looks like that up there with the new power bump i'm sold
Jacques Tibi wrote on December 29, 2015 - 4:42pm Permalink
I own an 2009-IMPREZA HATCH 2.0L, 2014 IMPREZA XV and a 2015 WRX STI. Now I am waiting for the Next Super SUBARU; something like a BZR 2-SEATS ONLY with 3.5L 6 CYLINDERS Twin-Turbo with more than +600HP
jp wrote on January 4, 2016 - 2:46pm Permalink
your dreaming
BRZ/86 Bloke wrote on January 28, 2016 - 6:57am Permalink
I love this car and really do hope it becomes a reality... but they've been threatening for ages with no sign of real production just yet!! Until then I'll just supercharge mine :)
Stibrodude wrote on March 9, 2016 - 6:52am Permalink
I have confirmation on the brz sti. I was told from a friend who works for subaru that they plan to have one for there 2018 model offering a sti version. It also mentioned a possible hp increase but the email my friend got was very vague. I had a 2004 sti and I have been waiting a long to buy a new one but I don't know when the right time is. I hope it's soon!!
Andy. wrote on August 27, 2016 - 10:57pm Permalink
This car is amazing I have owned it for about a year now. I will definitely consider buying another if they do have a more powerful version. I like the idea of the 3.6r turbo. But also the 2.0 turbo sounds good too. If suburu would like to install a electric turbo on mine for testing I would be more than happy to assist.