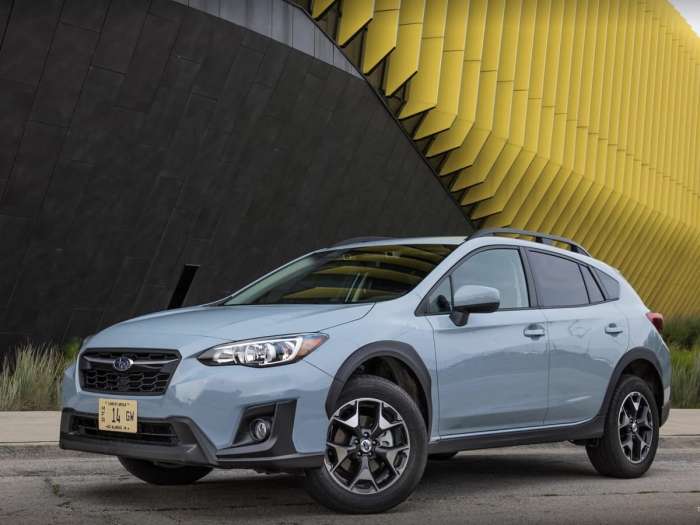 Subaru is the #4 most reliable brand in America according to Consumer Reports. See why Crosstrek is the brand’s most-reliable model.
Advertisement

Subaru is moving up in reliability and jumps two spots from sixth to fourth place among all automakers in the recent Consumer Reports Reliability Survey 2018. The redesigned second-generation The 2019 Subaru Crosstrek small SUV helps the brand move up the list because it has much better-than-average first-year reliability according to the latest survey.

The Crosstrek received a complete remodel for the 2018 model year and Consumer Reports usually tells buyers to avoid a first-year model after it receives a complete makeover. But the Subaru Crosstrek bucks the trend and is Subaru’s most reliable model in their all-wheel-drive lineup in spite of being newly-redesigned.

Crosstrek has led the Japanese automaker’s sales in terms of increase over last year and has helped Subaru of America keeps it’s sales streak alive in 2018. Consumers have been attracted to the small SUV for its standard all-wheel-drive, extra ground clearance, “go-anywhere” attitude and improved fuel mileage.

Crosstrek has been the shining star in the Subaru all-wheel-drive vehicle lineup and it’s a Consumers Report pick as the brand’s most reliable vehicle. Subaru hits a grand slam with the new 2019 Crosstrek.

Robert Lockwood wrote on October 26, 2018 - 11:49am Permalink
My 2018 Crosstrek Limited with 7k miles on her, saved our lives. When a 6k lbs. Jeep crashed into the driver side front end. And we walked away!
Clint wrote on August 26, 2019 - 2:51pm Permalink
Jeep doesn't make a 6k lb vehicle, a half ton truck weighs less. Easy with those dramatics
Jeff McDonald wrote on October 27, 2018 - 5:47pm Permalink
Best car that is a laugh look into crosstreck stalling while driving that will be the next class action suite it will stall while driving down road it is an accident waiting to happen. 2018 Crosstreck in shop 2nd time with 2000 miles on it Subaru has been crappy in their service. I owned 6 Subarus and will by another kind next time. GARBAGE
Bobby wrote on October 27, 2018 - 10:12pm Permalink
It's new engine break in, flush your oil. Same thing happened to me, just have to read up instead of biotching
Glenn wrote on October 28, 2018 - 11:11pm Permalink
Fix the drain hole problem on the front doors. Doors fill and hold water when parked uphill. No drain holes were located in the rear corner of the door.
Elder wrote on August 30, 2019 - 11:21am Permalink
Well get out your drill and poke some holes where needed!
Larry wrote on June 21, 2019 - 5:04pm Permalink
Own 2013 outback, 2014 and 2018 crosstreks. All excellent performers. Both the outback and 2014 Crosstrek have over 90,000 miles with no problems. Really want to buy the ascent next !