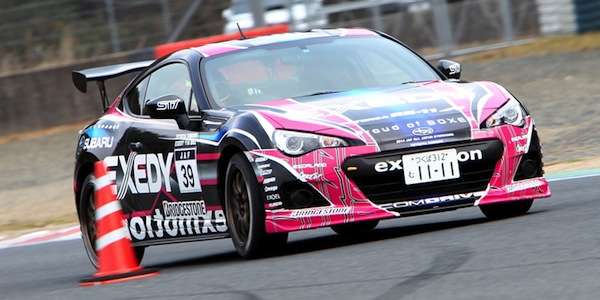 It was a big day for Subaru and STI yesterday as they showed off what Subaru performance models they are producing. The 2014 Subaru BRZ All Japan Gymkhana Championship car that just won its first race last month and Subaru Tecnica International (STI) wanted to show it off. STI brought the BRZ race car along with the 2015 Subaru WRX STI, LEVORG STI, and WRX STI Nurburgring 24-hour race car to the "Hyper Meeting 2014.” Why all the attention on Subaru’s motorsport involvement?

The custom car show is Japan's largest and was held on the Tsukuba circuit yesterday. The show was full of custom and tuned cars and it was a chance for STI to bring their full compliment of Subarus. The 2015 Subaru WRX STI, LEVORG STI, WRX STI Nurburgring 24-hour race car and BRZ Gymkhana Championship car were there to show off what STI is capable of producing.

The STI enhanced BRZ race car was there for a demonstration run on the Tsukuba circuit for fans. The Subaru Impreza, WRX STI, and Legacy, were also available for demonstrations on the race circuit. STI Product Development Department Director, Tetsuya Yamano, and driver Takuto Iguchi were there to answer questions at the Subaru booth this weekend. Fans could also purchase STI motorsports wear and STI parts for their cars.

The BRZ two-door sports coupe is the ideal Subaru for racing. It starts with its rear-wheel-drive configuration. BRZ uses a rigid, lightweight body and powerful brakes assisted by control-enhancing technology. This allows BRZ to quickly shave off velocity while precisely setting up a perfect line in the corners. It features vented disc brakes, electronic brake-force distribution, and the BRZ is lightweight at 2,762 lbs. The 2.0-liter Boxer engine sits low in the chassis and it all adds up for the perfect balance in a two-door sports car.

Subaru is also racing a 2014 BRZ in the All Japan Rally Championship that kicked off this weekend in Japan. STI has been racing the rally-bred WRX STI in the series, and for the first time, Subaru and Subaru Tecnica International will bring a new driver Kamata Takuma to compete in the new Subaru BRZ rally car.

How important is STI to Subaru? Subaru Motorsports, directed by STI, also runs another Subaru BRZ in the Super GT Series, the 2015 Subaru WRX STI in the Nurburgring 24-hour race in Germany and WRX STI in the FIA European Rally Championship WRC and ERC. Subaru’s motorsports involvement allows the technology that is developed on the track to be transferred to upcoming new production cars. Subaru would not be who they are today, without the decades of Rally racing and involvement in motorsports around the globe.

Other 2014 Subaru BRZ stories of interest.

Patrick Rall wrote on April 14, 2014 - 3:49pm Permalink
So they beat Ken Block in Rally America last year so now they are going after the sport that he created after leaving Subaru. Interesting.
Curtis Schofield wrote on April 14, 2014 - 7:48pm Permalink
lol - Ken Block makes Gymkhana look pretty good.. but he hardly invented it.. That's like saying Colin McRae invented Rally. :D
Patrick Rall wrote on April 15, 2014 - 10:18am Permalink
Sorry...Ken Block didnt invent Gymkhana, but would you agree that he had a major part in popularizing the sport to the point where it is today? Perhaps I should word it that Block gave life to the modern sport of Gymkhana rather than inventing it.