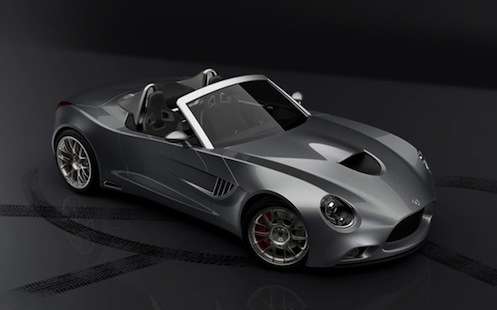 Italian automobile builder Puritalia Automobili has developed a two-seat sports car called the Puritalia 427 that is inspired by the iconic 1965 Shelby Cobra.
Advertisement

Puritalia Automobili has just released images and complete details on the Puritalia 427. The two-seat car is designed and built by the Italian sports car company and takes much of its inspiration from the 1965 Shelby Cobra. The company has definitely put a modern style and their distinctive Italian fingerprint on the car. Puritalia Automobili says the new roadster will be officially available in 2013.

The project that began two years ago is about to be finished and the car will officially make it to production next year. Puritalia Automobili design chief, Fabio Ferrante, set out to pay tribute to the American muscle car spirit and the Shelby Cobra’s legend and wed it with the “taste and the elegance of the Italian style.” From the looks of the image, the Italian designer did an extrordinary job. It's a unique design but there are still the classic lines of the 1965 Shelby Cobra that show through the Italian flare.

The two-seater roadster is light and powerful. The Puritalia 427 weights in at just 2403 lbs. and has a wheelbase of just over 102 inches. The body is made up largely of composite and carbon fiber panels. The sports cars chassis is a unique design and uses aluminum semi-monocoque with Chromoly steel tubular subframes for added strength.

The Cobra inspired sports car should be fun to drive in the corners. It uses a four-wheel independent suspension with double wishbones and an anti-dive and anti-squat geometry along with two-way adjustable mono-tube shock absorbers and adjustable stabilizer bars.

The rear-wheel drive Puritalia 427 is going to one fast sports car just like the Cobra that inspired it. It will have two different engine options to choose from. A tamer 5.0-liter naturally aspirated V-8 producing 445 horsepower. And if that isn’t enough to get your heart pumping, a 5.0-liter supercharged V-8 producing 605 horsepower is available for extra fun at the track.

Both engines are mated to a six-speed manual gearbox that uses a twin-disc hydraulic clutch with a limited slip differential and balanced aluminum driveshaft. In order to stop the two-seat roadster, six-piston Brembo brakes are used on the front and four-piston on the rear. 19-inch wheels on the front and 20-inch wheels on the rear are wrapped in Pirelli Pzero rubber for traction.

The light and powerful two-seater roadster should be an incredible driving machine. While the original Cobra Shelby was a bare-bones car designed for the race track, the Puritalia 427 will be comfortable enough to drive on the road for daily use. Whether the car is used on the track or the street, the new sports car will be one fun ride.

The car will be officially presented sometime in 2013 but no official launch date or pricing has been announced. The press release says a limited run of 100 cars will be made initially, and an exclusive pre-series program will be available for a select few to purchase one of the first 10 cars. You can contact Puritalia Automobili for more information on ordering the all-new Puritalia 427.