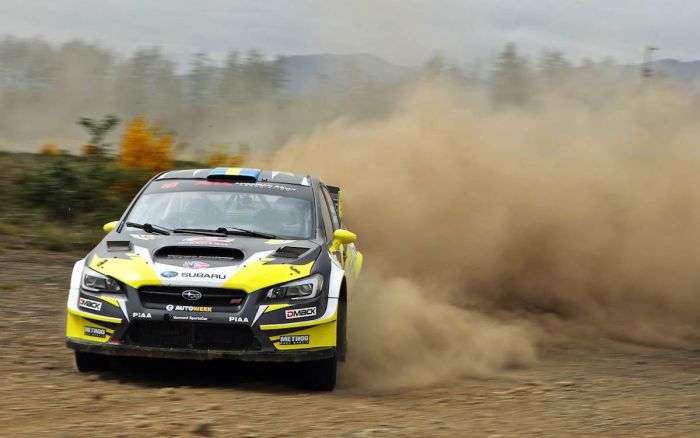 The David Higgins and Crag Drew started the western Washington rally fast, and were on pace to win after leading the first stages, but suffered a mechanical issue with their #75 WRX STI. The pair made the decision to retire the STI for the weekend and could only cheer on their teammates from the sideline.

The 2018 Olympus Rally is grueling with over 125 miles of technical, tree-lined forest roads. The rally this weekend was fast, dusty, and rough which caused mechanical issues for many cars including Higgins #75 Subaru WRX STI. Sandell seemed right at home and after the first stages, Sandell and Almkvist had secured their first place position and held on for the rest of the event.

The pair were happy with their result at the Olympus Rally this weekend and are already looking forward to their next event. At the podium, Sandell said, “It’s been a while since I competed at this high-level in rally, but together with Per we put some good notes together and we were fast and smooth and stayed out of trouble. The team’s Subaru WRX STI is an amazing car to drive, we had a lot of fun!”

Last month, Higgins and Drew went against Ken Block at the Oregon Trail Rally and beat their old rival in his 1991 Escort Cosworth “Cossie”. They beat Block and Gelsomino with over an 8-minute margin who finished third.

The next round in the American Rally Association championship is the Susquehannock Trail Performance Rally (STPR) next month, June 1-2 in Wellsboro, PA. SRT USA will bring the #75 car again piloted by David Higgins and Craig Drew and they will be joined by teammates Chris Atkinson and Stephane Prevot in the #55 Subaru WRX STI rally car.