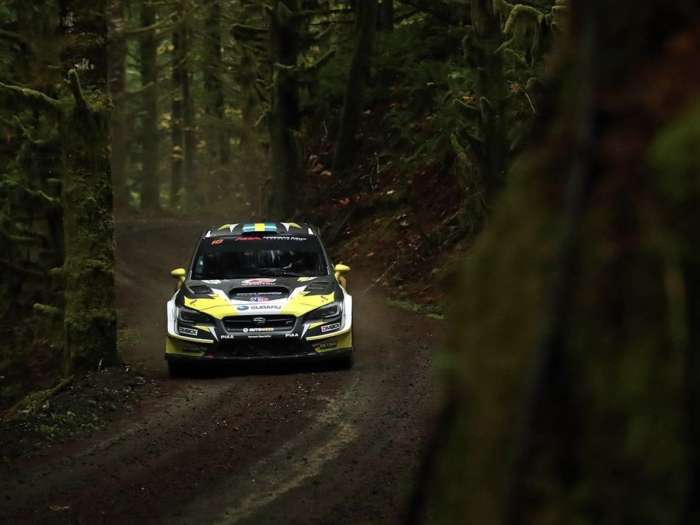 David Higgins is the 2018 ARA’s Driver’s Champion but Patrik Sandell beat him three times this season. Sandell won all three ARA rounds he entered, with victories at the Olympus Rally, Idaho Rally and now the season finale at the newly-revived Tour de Forest rally in Washington. Both teams pilot identical 2018 Subaru WRX STI rally cars prepared by Vermont SportsCar, but it was Sandell winning again.

In his first rally for SRT USA in May, Sandell won the Olympus Rally in the #18 Subaru WRX STI. Higgins and Drew started the western Washington rally fast, and were on pace to win after leading the first stages, but suffered a mechanical issue with their #75 WRX STI. The pair made the decision to retire the STI for the weekend and could only cheer on their teammates from the sideline.

In Sandell’s second rally in September, choking dust couldn’t stop the #18 Subaru WRX STI at Idaho Rally, but it did keep David Higgins in second place. Sandell got out to a quick start and that left Higgins and Drew to go after him and literally eat his dust. It was so dry there was a brush fire that forced the cancellation of two of the afternoon on day one. When the dust settled Sandell and Almkvist in their #18 WRX STI extended their lead to over 30 seconds over Higgins for the win.

The Tour de Forest Rally, last run as a national championship event in 1983, was a new rally on the ARA schedule and was revived in 2018. The event featured 115 stage miles spread across fourteen special stages on the tree-covered gravel roads south of Seattle, Washington. As expected, Pacific Northwest weather soaked the rally stages early in the event, creating extremely slick conditions.

Sandell endured a strong challenge from Higgins and Drew. Both teams piloted identical 2018 Subaru WRX STI rally cars prepared by Vermont SportsCar, but it was Sandell winning again after Higgins was slowed by a turbo problem. After repairs, Higgins began to claw back some time from Sandell, but in pushing hard to make up time Higgins and Drew went off the road on stage twelve. Sandell went on to win his third rally on the treacherously slippery stages of western Washington.

Sandell’s primary job for Subaru is to do battle with the Andretti Volkswagen Beatles driven by Scott Speed and Tanner Foust in the newly-formed ARX Rallycross series. He didn’t win any races or even get on the podium, but he did secure third overall in the ARX Driver’s Championship.

Sandell at the Tour de Forest Rally said, “Three for three! Thank you so much to Subaru for giving me the opportunity to do some rallying this year, it’s been fantastic. The Subaru WRX STI rally car is a joy to drive, even in difficult conditions like we had this weekend. This rally was a big challenge, the roads were so slick and we had a big fight on our hands with Higgins, so I’m happy to come away with the win.”