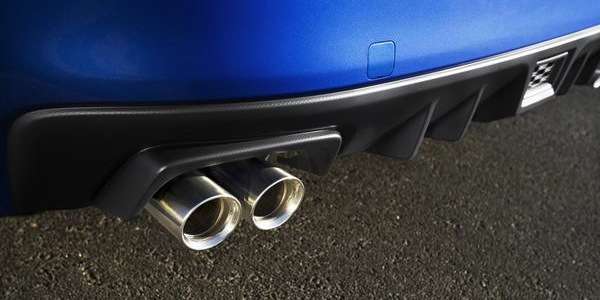 The all-new 2015 Subaru WRX STi will launch in the UK later this year but won’t be getting a domestically-tuned Cosworth variant.
Advertisement

The iconic Subaru performance flagship, 2015 WRX STI is returning to the UK one year after it was axed from the market and demand is high. But the 2015 STI won’t be getting a domestically-tuned variant like the Cosworth Impreza STI CS400. The 2015 STI that made its European debut at the 84th Geneva International Motor Show will officially go on sale in the UK May 1 and deliveries will begin in September. Subaru says the new-generation STI will be in UK showrooms as early as this spring.

But UK performance enthusiasts won’t be getting a domestically-tuned variant like the Cosworth Impreza STI CS400 that Subaru offered for the previous generation performance car in the UK. According to AutoCar UK, managing director of Subaru in the UK Paul Tunnicliffe said he wished to avoid pursuing “a niche within a niche” when he was asked about the potential for another model like the Cosworth Impreza STI CS400.

That variant was developed with the help of Cosworth who has headquarters in Northampton, UK and employs staff across Europe and the U.S. The performance tuner, with the blessing of Subaru, took the previous generation STI and significantly upgraded the engine and chassis and some pleasingly stealthy styling modifications. The car was capable of a neck-snapping 62 mph in just 3.7 seconds, and a standing quarter mile in only 12.75 seconds.

The CS400 was the most expensive, most powerful Subaru ever launched in the UK, with 395 bhp and 400 lb ft of torque. Subaru UK only offered 75 of these cars for sale and they were snapped up quickly by performance enthusiasts.

Cosworth engineers kept most of the the STI’s major chassis components but upgraded the car with Eibach springs that allow the car to run 15 mm lower on its front axle. They also used specially tuned Bilstein dampers on all four corners and changed the STi’s chassis bushings. Cosworth also used lightweight 18 in wheels and Michelin Pilot Sport 3 tires, as well as 355 mm ventilated front brakes and six-piston calipers from stopper specialist AP.

Tunnicliffe confirmed to AutoCar that around 160 orders for the new 2015 Subaru WRX STI have already been placed by British buyers, and he was confident of selling 250-500 cars in the UK. With demand for the factory 2015 WRX STI so high, it looks like Subaru won’t be employing Cosworth to develop a 395 hp STI variant. It’s too bad the UK won’t be getting the Cosworth STI, but it won’t take STI performance enthusiasts long to find their favorite tuner to make engine and chassis mods to their new 2015 Subaru WRX STI.