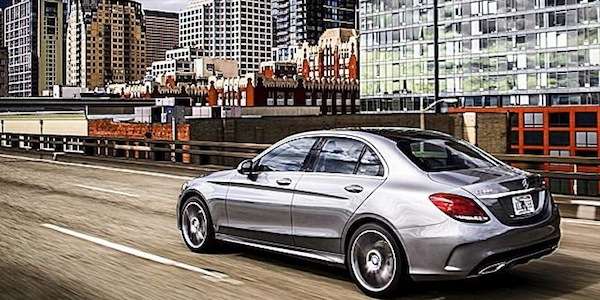 The all-new 2015 Mercedes-Benz C-Class comes with a new design that spawns numerous benefits. How does it get bigger and lighter?
Advertisement

The all-new 2015 Mercedes-Benz C-Class comes with a new “intelligent lightweight design concept” that saves 200 lbs in weight on the new luxury sedan. With this new design concept, the 2015 C-Class establishes new benchmarks in its class. The C-Class is the top seller for the German brand here in the U.S. and Mercedes plans on expanding its influence here in North America.

Sales of the outgoing model, which was launched in 2007, total over 2.4 million units worldwide. The U.S. market will get two new C-Class models for buyers. It will come in two trim levels, the C300 4MATIC with a 2.0L turbocharged direct-injection in-line four-cylinder engine delivering 241 hp and 273 lb-ft of torque, and a C400 4MATIC with a 3.0L bi-turbo direct-injection V6 producing 329 hp and 354 lb-ft of torque. Mercedes says a rear-wheel drive version of the C300 will be launched in the first quarter of 2015.

C-Class gets bigger and lighter

The 2015 C-Class gets bigger and Mercedes says this is to take into account people's increasing average height. With a 3 inch increase in the wheelbase (112 inches) compared with the previous model, the new C is 3.7 inches longer (184 inches) and 1.6 inches wider (71 inches). The additional space benefits rear passengers the most. The new C-Class also increases its trunk capacity to 17 cubic feet.

A new lightweight bodyshell on 2015 C-Class

The biggest design concept change comes in the new C-Class bodyshell. It has reduced weight and it’s more rigid which contributes to improved handling in the new sedan. The new rigid bodyshell also benefits the noise and vibration characteristics and a high level of crash safety.
Numerous benefits come from this lightweight construction

The aluminum hybrid body features an innovative lightweight construction that’s around 154 lbs lighter than a conventional steel body. The vehicle's overall weight is reduced by around 200 lbs. This new lightweight design concept spawns numerous benefits like reduced fuel consumption,and a lower center of gravity which improves handling in the 2015 C-Class.

Mercedes engineers designed a completely new structural design by using an unusually high proportion of aluminum for a mass-produced range. The share of aluminum has risen compared with the successful predecessor from under 10 percent to almost 50 percent. This also gives the new C exemplary crash safety. It now meets the more stringent internal Mercedes-Benz safety standards based on what actually happens during accidents. Mercedes uses a high-strength safety passenger compartment that forms the core of this concept.

The all-new 2015 Mercedes-Benz C-Class sedan comes with a new design concept that spawns numerous benefits. It gets bigger and lighter and has improved handling, fuel mileage and superior safety because of it. The 2015 C-Class makes its dealer launch in September here in the U.S. Stay tuned to Torque News for more 2015 C-Class news.

Other 2015 Mercedes-Benz C-Class stories of interest.
Why 2015 C-Class will send BMW scrambling back to the drawing board