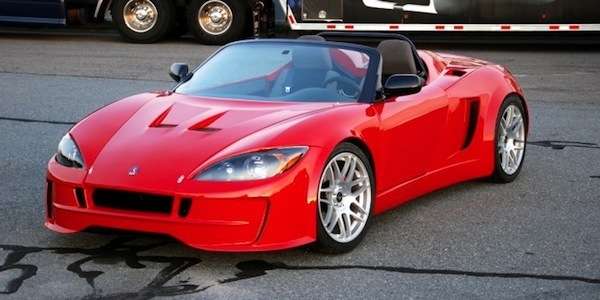 Why are some guys born to build cars? This retired Canadian is the first to transform a Subaru Impreza into a sports car.
Advertisement

Some people are born to build cars and this retired Nova Scotia man was the first Canadian to transform a Subaru Impreza into a sports car. When Tom MacPherson retired from being a Ford tool and die maker in 1993, he couldn’t just sit around and collect sea shells on a beach somewhere. He had always been mechanically minded and liked to build things with his dad as a kid.

Throughout his life, Tom has built several boats, a hydroplane and his latest project, a Subaru Impreza that he transformed into a sports car. MacPherson says, “I can’t stand sitting around doing nothing. That’s when you get sick and you die very young, when you cease to do things. The mind goes dead and the body goes dead. Keep going. As a young man, that’s good advice.”

MacPherson heard about a company called Factory Five who builds kits for the Subaru Impreza sedan and WRX performance car. It’s called the 818s and it’s a two seat sports car. MacPherson took a tour of their factory in Massachusetts and then decided to buy the kit. He was one of the first to buy it and says, “I got one of the first 100 they produced.”

Factory Five Racing provides the chassis, frame, suspension, and body, and the buyer provides a 2002-2007 Subaru WRX or normally aspirated Impreza donor car. If you have a Subaru Impreza or WRX, you have whatever you need to build the 818 in your garage. The 818 “S” (which stands for Street) uses composite body panels that are gel coated and don’t have any body seams so there is absolutely no panting required.

The idea behind the 818 is to build a fun-to-drive mid-engine lightweight sports car. It comes in two variants, the 818S Street model and the 818R which is the track version and “Race” model. The company was launched with the Factory Five Mustang kit model. The kit for the Subaru Impreza/WRX 818S is $9,900 and can be finished for $15K.

MacPherson opted for a Subaru Impreza as his donor car and went to work on the project. From it he took the engine, the front and rear spindles and brakes as well as the dash pod, seats and seat belts. Because the Subaru Impreza is an AWD vehicle and the 818s is a two-wheel drive, there were a lot of modifications needed. Helping him with all that was a friend of his, Glen Roy. Roy also did the wiring for the new car.

The build takes longer than expected

The retired Canadian found out it takes much longer than the 350 hours to 400 hours the factory says it takes to build the car. “You might do it in that many hours if you had four guys working on it.” He said. MacPherson started in November 2013 and finished in June of 2014. “Once you get started it’s hard to stop. You just want to go on and on until it’s completed.”

MacPherson says he’s heard that only about 15 percent of people who start the build complete their cars. He’s happy to be in that percentage and was the first person in Canada to complete the car. He’s now enjoying the completed Factory Five sports car that was adapted from a Subaru Impreza. It’s a true sports car and one that could reach high speeds, but says he hasn’t taken it above 90 km/hr yet. He’ll make some additional modifications before he calls the project truly complete. Why does he do it? Because some people are car builders and that’s what they love to do. For more info go to Factory Five here.

Story comes from The News in New Glasgow