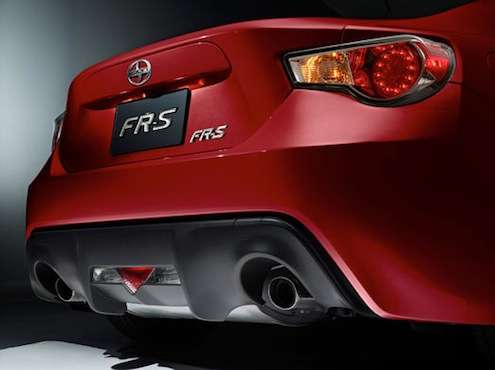 Report: No Scion FR-S turbo or convertible for U.S.

Because Toyota wants to keep the cost of the Scion FR-S near $25,000, they have shelved the idea of bringing a turbocharged version or convertible to the U.S. market.
Advertisement

In a recent report by Automotive News, Toyota says that because the Scion FR-S already has a starting price above $25,000, the idea of a turbocharged performance version has been shelved because it would make the rear-drive sports car too expensive. The report goes on to say that a convertible variant won’t be offered in the U.S. because of the same pricing issues. But Toyota will offer the convertible FR-S in overseas markets under the Toyota GT 86 badge.

We have reported here that a soft-top Scion FR-S has been in the Toyota’s plans since the beginning of the joint project with Subaru. Tetsuya Tada, Toyota lead developer for the 86 project, has said the car was “designed from the start to be both a coupe and a convertible”, and so it’s been planned all along. But it looks like the convertible FR-S won’t be coming to U.S. showrooms. Japan and Europe should see the soft-top arrive in early 2014.

In the U.S., the Scion FR-S two-door coupe, like the the Subaru BRZ, is well priced at $25,000 and selling well. A convertible variant would add a few thousand dollars to the cost and Toyota doesn’t want to mess with the success they are having here in the U.S. It makes us wonder why Toyota thinks that the convertible wouldn’t sell in the North American market.

It would seem that the only thing better than a reasonably priced, sporty, rear-wheel-drive sports car, would be an FR-S with the top down. There aren’t a lot to choose from in this segment other than the Ford Mustang and the Mazda MX-5. The 2013 Ford Mustang convertible has an MSRP of $27,200, the 2012 MX-5 starts at $23,470. The FR-S would likely be priced near $28,000 and Toyota thinks that the higher priced convertible would sit on dealer lots.

The report also says that Toyota has shelved plans to bring a turbocharged performance FR-S to the U.S because of the increased cost. This is not a surprise, because Toyota has never had plans to offer a factory turbo version of the sporty two-seater. But it looks like they will offer a turbo aftermarket kit from Toyota Racing Development (TRD), for those who want more power. The current Scion FR-S has 200 horsepower and comes with a choice of six-speed transmissions in either manual or automatic configurations.

It looks like buyers in North America will have only one choice in the Scion FR-S. We will have to wait and see if Subaru will offer a convertible BRZ here in the U.S.