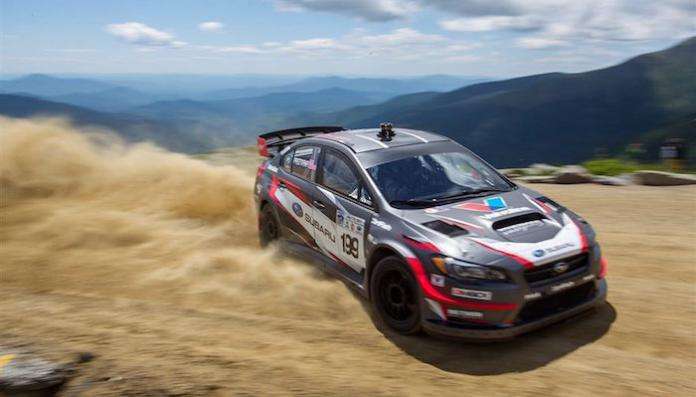 Pastrana Shatters Mt. Washington Record; Higgins’ Subaru WRX STI Goes Off the Side of a Cliff

Travis Pastrana in the #199 Subaru WRX STI was in full attack mode at the Mt. Washington Hillclimb this weekend. He shattered David Higgins record set in 2014 with a time of 5:44.72. David Higgins had a very different experience as he went off the side of the road, but was unhurt.

Pastrana crushed Higgins' Mt. Washington Hillclimb record reaching the 6288’ summit actually beating the record two times during the weekend. His first record run up the twisty 7.4 mile race course was 5:46.28. Pastrana was unbeatable and shaved another two seconds on his second record run. Pastrana was behind the wheel of his #199 WRX STI specially fitted with a 600hp boxer powerplant.

It was not a good day for David Higgins in his #75 Subaru WRX STI. Equally determined for a new record, Higgins pushed too hard as he approached the classic dirt Cragway Turn 2.5 miles from the summit. The WRX STI drifted wide, hit rocks on the outside and spun off the road in a dramatic moment. The helicopter caught the action from above. 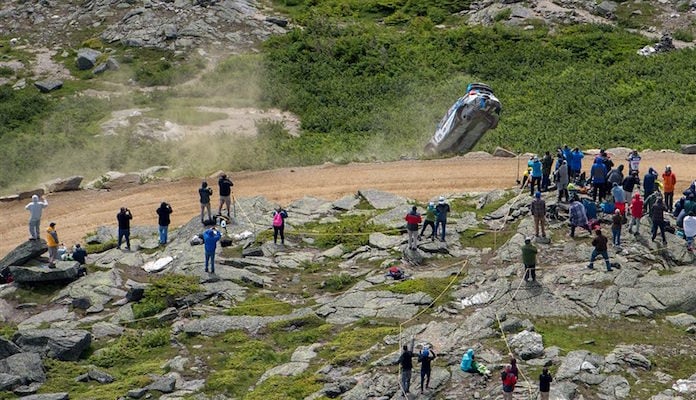 Luckily, Higgins emerged unscathed from his 2017 WRX STI, and despite the dramatic looking incident, the car was relatively undamaged with the exception of the left rear wheel assembly. Higgins wanted to beat Pastrana and his old record and pushed his WRX STI a bit too hard. If you are going to go off this road, he picked a good spot that wasn’t a steep drop off of thousands of feet. He did set the fastest speed on the Quarter Mile section ever recorded at 116 miles per hour earlier in the day.

It was an excited day for both Subaru drivers, but Pastrana was ecstatic with his results. When asked about how he bested his first run, Travis described driving “the bottom half cleaner and a little slower”, this helped him conserve his tires significantly allowing for a much faster top section.

Travis Pastrana driving the #199 Subaru WRX STI, smashed the old Mt. Washington Hill Climb recored set by Higgins in 2014. He won’t have long to celebrate. Up next is the New England Forest Rally in Newry, Maine July 21-22. You can bet Higgins will be fully prepared for the challenge.