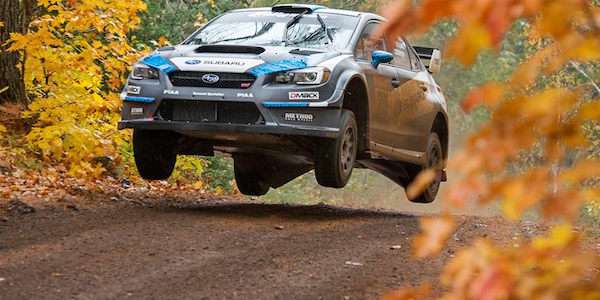 Higgins wins again in the #75 Subaru WRX STI. It was a one-two win for SRT USA.
Advertisement

How do you beat David Higgins, a six-time Rally America champion, in the #75 Subaru WRX STI? You don’t, the only thing you can hope for is a close second. It was David Higgins and Craig Drew again holding off their main rivals, Travis Pastrana and Robbie Durant to finish the amazing season-closing Rally America Series. SRT USA finished the 2016 Lake Superior Performance Rally one-two at the final round of the 2016 Rally America National Championship this weekend.

Pastrana couldn’t catch Higgins’ Subaru WRX STI even though he drives a matching Open Class Subaru STI rally car. Higgins secured the 2016 Rally America championship back in August with a win, and didn’t really need to win this weekend. But nothing would stop the champion from going all-out and beating Pastrana. It’s just what Higgins does.

Three WRX STIs on the podium

The race wasn’t even that close. Higgins and Drew secured the victory by a 1 minute 32 second margin over Pastrana and Durant. O’Sullivan and Putnam in their Subaru WRX STI, rounded out the podium in third, trailing Higgins by 11 minutes 33 seconds.

Higgins was coming off a tough battle in the 2016 Subaru WRX STI Global Rallycross car in Los Angeles last weekend. He made the Final and finished 8th in the hard-hitting Red Bull Global Rallycross finale. He then had to immediately turn around and head to Michigan for LSPR. After the rally race Higgins commented, "It was a long and intense season between rally and rallycross. It’s great to be part of this team and in the history making streak.”

Pastrana needs more time in the STI to beat Higgins

Even though he was within striking distance of Higgins, Pastrana decided to keep his Subaru WRX STI out of the ditch. Rather than push his STI too hard for the win, Pastrana and Durant set their objectives to improve pace notes and work on perfecting in-car communication.   Pastrana says, ”Robbie and I are working to get the notes as good as we can and also trying to understand the capabilities of our STI. The car has so much down force and it works great, but there is such a difference slowing down from 120mph to a corner, than slowing down from 60mph to a corner. Learning the car, learning how to best work with my co-driver, as well as my own limits is a lot of work, thus we need some time before we even get to where David is now.”

What’s next for David Higgins after another successful season in the #75 Subaru WRX STI? “I’m looking forward to spending some time at home relaxing with my kids and watching them race karts”, said Higgins at the finish. He now gets some well-deserved time off after GRC and winning his sixth straight Rally America Championship.