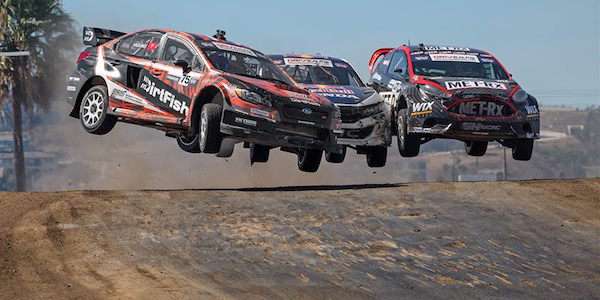 Subaru’s WRX STI Scores Last in GRC Manufacturer’s Race; Why Subaru Could be Closer to Beating VW Than You Think

Subaru went into the 2016 Red Bull Global Rallycross season with a plan to get better, but it appears they are not improving much, or are they? They finished last in the Manufacturer Championship, and didn’t have any podium finishes in 2016. How does Subaru beat the Volkswagen Andretti Rallycrosss Beetles which seem to be unstoppable? Tanner Foust and Scott Speed are driving lights out and look to be unbeatable. Subaru SRT USA says they have a multi-year plan to target winning the series’ Drivers and Manufacturer’s championships in 2017. Are they closer than its appears?

How are they doing?

The knock on Subaru has been, they don't have the speed (no pun intended) to keep up with VW. Could their qualifying be an indicator of faster things to come? This weekend in LA, it was looking good as Chris Atkinson in the #55 Subaru WRX STI put on a brilliant performance during qualifying and secured the fastest overall time on Sunday. Both Atkinson and teammate David Higgins advanced to the Final, but were sitting near the back of the pack on row 3 and 4 respectively. Atkinson finished seventh and Higgins eighth. It was the VW Beetle driven by Scott Speed that won the race along with the Driver’s Title, and Volkswagen wins the Manufacture’s Title.

On paper, it looks like they are losing ground

For Subaru to win both in 2017, it appears they have a long way to go. This season they changed drivers as Bucky Lasek and Sverre Isachsen started driving the WRX STIs, but Subaru made a switch and brought in Australian Subaru Rally driver Chris Atkinson. David Higgins has also gotten lots of seat time in the WRX STI GRC car this year and performed well. Subaru even tried Japanese rally legend Toshi Arai in the STI with no success this weekend.

Subaru is working on a new 2017 Subaru WRX STI Supercar

Subaru said they would use the 2016 season to “substantially increase testing and development work on the new Subaru WRX STI GRC Supercar. Subaru Tecnica International and Subaru technical partner Vermont SportsCar have been working hard behind the scenes to develop a car that can catch the Volkswagen Andretti Rallycrosss Beetles driven by Foust and Speed.

Chris Atkinson, finished with 88 driver points, the most of any of the Subaru drivers. It’s a far cry from Scott Speeds 571 points to win the driver’s title. It appears they are far away from achieving their goal, or are they closer than they are letting on? Has Subaru been quietly gaining technical information this year to seriously challenge next year in a new 2017 Subaru WRX STI Supercar? They might be closer than anyone thinks.