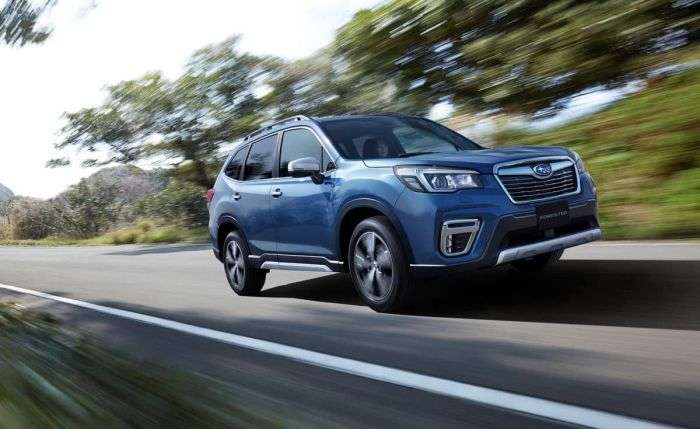 Subaru Corporation announced their Japan-spec 2019 Forester e-Boxer Hybrid today and says the new model will be available in Japan starting September 14. If pre-orders are any indication of how popular the new Forester hybrid will be, it’s going to be a big hit.

Subaru opened up the new fifth-generation 2019 Forester pre-sales on May 18 for the Premium, Touring, X-Break, and Advance models in Japan. The Japanese automaker reports approximately 40 percent of those orders have been for the new e-Boxer Hybrid Advance model.

Subaru did not release fuel mileage estimates, but here’s what we know about the engine specs on the fifth-generation 2019 Forester e-Boxer. Subaru will use the newly-updated 2.0-liter direct injection horizontally opposed boxer engine coupled with electric technology producing the "e-Boxer". Subaru says it will offer improved performance over the standard 2.5-liter Forester Boxer.

The new compact SUV will be powered by the newly developed 2.0-liter direct injection engine coupled with an AC synchronous electric motor. It will use a lithium-ion battery, and Subaru says it will include SI-DRIVE. With the 2.0-liter gas engine mated with the electric motor, Subaru Corp says acceleration of the Forester e-Boxer will exceed that of the newly-upgraded 2019 U.S. spec 2.5-liter Forester gas model. The 2.5-liter Forester gas engine now produces 182 hp and 176 lb-ft of torque.