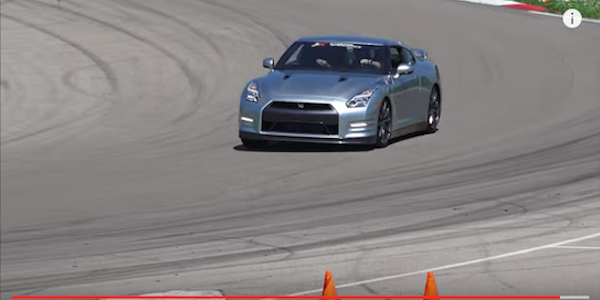 What one thing sets the 2017 Nissan GT-R apart from all other high-performance cars? It’s not so simple.
Advertisement

The new 2017 Nissan GT-R is called Godzilla and it gets its name from the insane performance and its a brute on the track. What one thing sets the 2017 Nissan GT-R apart from all other high-performance cars? It’s not so simple unless you have an engineer like Jason Fenske explain how the GT-R’s 565 horsepower gets trans feared to the ground. What sets GT-R apart?

GT-R sends power to all 4 wheels

The Nissan GT-R sends power to all four wheels, where most other performance cars are rear-drive. Rear biased, yah rate, lateral acceleration, steering angle all seem pretty complex but it’s what makes up the Nissan GT-R and why its called Godzilla. How does it all work? Scroll down to see Jason explain how the GT-R AWD system works.

Nissan’s GT-R has always sent a tremendous amount of power to all four wheels. It does it more efficiently than just about any other supercar on the planet. It’s this AWD system that sets it apart and gives the car incredible grip and astounding acceleration. Jason Fenske has first hand experience with the new 2017 Nissan GT-R and took it out to Nolan Motor Sports Park put on by Xtreme Xperience. He took the GT-R and three other supercars to see how it performed against the best. How did it check out? The AWD system made all the difference.

The GT-R is a rare breed. It doesn’t share its platform or its parts with any other Nissan vehicle. Nissan doesn’t use the GT-R as a test-bed for new Nissan technologies or processes.

PAGE 2: How GT-R performs against Ferrari, Porsche and Lamborghini

Jason says, “It’s without a doubt one of the fastest cars for the money. It was quite surprising how much different it felt at the limit in comparison to the Ferrari 458, Porsche GT3 and the Lamborghini Gallardo.” How does the 2017 Nissan GT-R AWD system work? How is it so fast?