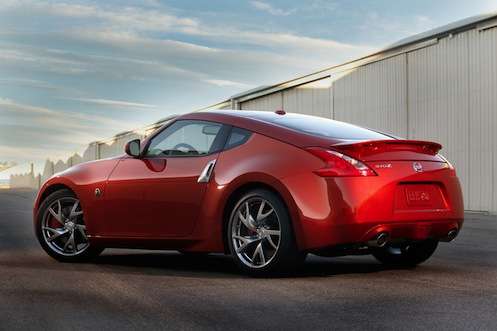 Nissan released the first video of its Project 370Z to help promote the launch of its updated 2013 370Z sports car.
Advertisement

Back in February, Nissan invited fans to participate in what it’s calling "Project 370Z." In an effort to highlight the numerous options available on the new 2013 Nissan 370Z, Nissan is giving fans the opportunity to create a project Z in which they get to choose how the car is put together.

Via Nissan’s Facebook Performance page, Nissan will start with a fresh 2013 370Z that will be built by fans in three upgrade phases: power, handling/brakes, interior and exterior. Each phase will start by fans posting comments on the page, and then they’ll get to vote on the upgrades and accessories. Those with the most fan support will be chosen for each phase as Nissan builds the unique car.

The build will be based on the updated 2013 370Z, which features new LED daytime running lights, revised bumpers, and other upgrades for the new model. The Project 370Z has been divided into three separate build phases, and Nissan will release a video of each phase over the coming weeks. Nissan is well underway with the crowd-sourced project 370Z, and Nissan has crafted the first video documenting the first step of the project. For this first stage, 370Z fans were able to choose the powertrain, turbocharger kit, exhaust modifications, and suspension and brake setup.

For the first phase of the build, fans chose a GReddy twin turbo kit, which should pump up horsepower on the 3.7-liter V-6 to around 500. The stock Z engine gets 332 horsepower, so the twin-turbo kit will make a big difference in performance. Nissan technicians in the clip, dismantle the front of the sports car, yank the engine and bolt on the aftermarket goodies that fans have chosen.

Fans wisely chose to use a GReddy Ti-C catback exhaust that will help the 500 horsepower engine breathe easier, and the exhaust pipes go on next. Nissan is also installing a KW suspension setup and bigger brakes from StopTech to handle the extra stopping power needed on the project car.

Nissan will document the full build before unveiled the car in May during ZDayz 2012 in the Great Smoky Mountains of North Carolina and Tennessee. Nissan promises the car will also be made available to other enthusiast events such as ZCON 2012 and SEMA.

Stay tuned for Stage Two, which outlines the design changes voted by fans for the exterior of the Project 370 Z.

Check out the phase one video below.