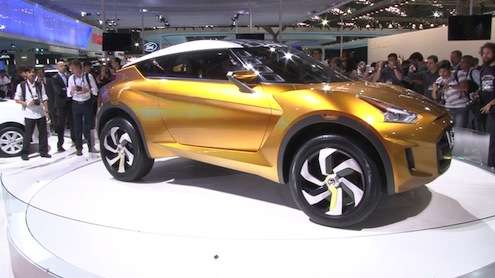 Nissan is on the move with Extrem concept [video]

Nissan has unveiled the Extrem concept car in Brazil and is a manufacturer to watch around the globe in the future.
Advertisement

If you haven’t noticed, Nissan is making news around the globe and is an automaker that is on the move. They have just unveiled the new Extrem concept in Brazil where the Japanese automaker plans to increase its presence and aims to achieve 5 percent market share by 2016. Nissan is advancing around the world and is attempting to be an even greater global player in the future.

Nissan made big news at the Sao Paulo motor show, the largest show in South America, with a new concept car designed specifically for the Brazilian market, the Nissan Extrem. Nissan says the Brazilian sunsets, people and culture were the inspiration for the new concept car. The Extrem concept has a unique color that was inspired by the sunrise and sunsets on the coast in Rio.

"The color that we chose for the Extrem, we call it solar cortex, it's inspired by the brilliant sunrise and sunsets that we saw while we were visiting Rio," said Bauer. "We wanted it to look not only exciting but modern and contemporary." Nissan is tapping into the Brazilian market in a big way and is getting the attention of the people in the South American country.

Nissan is on the move in Brazil

The company is already underway in the building of a new manufacturing plant in Rio de Janeiro and is scheduled to start operation in 2014. At the Sao Paulo show, Nissan unveiled two new models meant for the Brazilian market that will be built at the new plant. The Nissan Frontier "10 Years," is a special edition truck that celebrates the first decade of Nissan's production in Brazil.  And the Nissan March "Rio 2016," tied in with Nissan's sponsorship of the Olympic games.

The new Extrem concept car shows what the future at Nissan will look like. The Japanese automaker is making global advances in both technology and performance and is expecting big growth in Brazil. Nissan plans to introduce eight new models into the Brazilian market by 2016.

"It was just a fantastic opportunity to put something together that we feel really embodies the vitality, the energy and the great personality of the Brazilian culture," said Robert Bauer, design manager for Nissan. Designing the Extrem for the Brazilian market meant elevating the profile of the concept car, giving it two doors, enough room for four people and storage space.

And look for Nissan to make advances in the area of high-performance vehicles. They have just unveiled a 2013 Altima V8 supercar that will compete in the Australian V8 Supercars Championship. They will use the technology and information they gather from racing and apply it to their production vehicles in the future. Nissan will likely be developing some new high-performance production models in the near future.

Nissan is certainly on the move in Brazil and around the globe. They have caught the attention of the people in Brazil and Australia with the new Nissan Extrem concept and the 2013 Nissan Altima V8 supercar.

Watch Nissan Extrem “tough on the streets” video below: