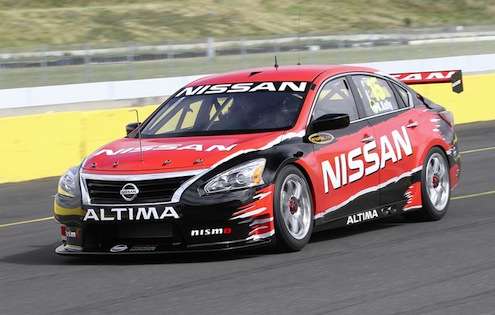 Nissan has unveiled a very special 2013 Altima V8 supercar that will compete in Australia's V8 Supercars Championship and here in the U.S. next season.
Advertisement

Any automaker who is serious about performance is involved in racing at some level as they develop performance technology. That information then filters down to the production car level that we get to enjoy. When you think of manufacturers involved in racing, automakers like Chrysler, Ford and Chevrolet are at the top of the U.S. list. Mercedes-Benz, BMW and Audi would be in the European mix. But when you think of V8 high-performance vehicles, Nissan hasn’t been a part of the conversation, at least not up until now.

Nissan has unveiled the 2013 Altima V8 supercar at a launch event in Australia as they prepare for its entry in Australia's V8 Supercars Championship next season. The Japanese automaker is making a big push to change the brands image to one of building quality economy cars, to an automaker who knows how to unleash ground-pounding horsepower. They have taken a big first step with the unveiling of the V8 Altima.

The Altima V8 four-door looks like the tame factory version, but underneath it has a 650 horsepower 5.0-liter V8 powerplant. The supercar has been designed and built to the category's new 'Car of The Future' regulations, which include 18 inch wheels, a transaxle gearbox and independent rear suspension. Nissan is backing the Kelly Racing V8 Supercars team as owners/drivers Todd and Rick Kelly will bring four V8 Altima cars to the 2013 V8 Championship.

Nissan Motorsport will use the same production-based VK56DE engine in the Altima V8 Supercar, as the one that powered Nissan to FIA GT1 World Championship glory in 2011. The VK56 engine also powers the all-new 2013 Nissan Patrol that goes on sale in Australia February 1, 2013.

On the track for testing

Nissan Australia Managing Director and CEO William F. Peffer Jr. joined team co-owners and drivers Todd and Rick Kelly at the unveiling last week. Nissan didn’t waste any time getting its new V8 Altima on the track. They began the first phase of aerodynamic testing at the Calder Park Raceway in Melbourne. Team owner and driver Todd Kelly was given the first honors of taking the wheel of the car, despite just recently having shoulder surgery.

The testing of the Nissan supercar gets seriously underway as the team prepares for the race debut in Adelaide on the first weekend in March. Interest in the new V8 Altima is high around the globe as the race community watches how Nissan will perform in the 2013 V8 Championship. We know whether they win or lose, the valuable information Nissan gathers from the V8 supercar on the track, will be used for future technology in their production cars.

Based on the first images of the 4-door, 650 hp 5.0-liter V-8-powered 2013 Altima supercar in action, look for plenty of speed and power to be unleashed next year when the series makes its first U.S. visit at the Circuit of the Americas in Austin, TX. It will be interesting to see what performance technology begins to show up in future Nissan production cars.

Watch the two videos below as Nissan unveils the 2013 Altima V8 Supercar and takes to the track for the first time.