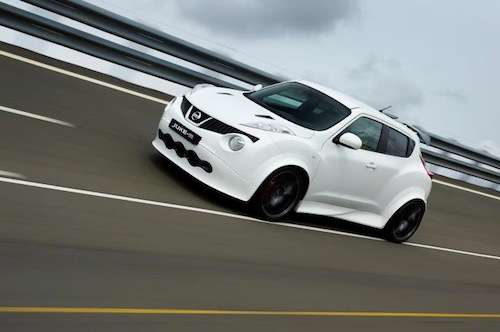 Nissan Juke-R emerges in both real and virtual world [Video]

The first production version #001 Nissan Juke-R has emerged in the real world and stars in the virtual world with the Juke NISMO in Gameloft Asphalt 7: Heat.
Advertisement

Nissan announced back in May that the high-performance Juke-R would be a production vehicle and would be made available to buy in a very limited run on a build-to-order basis. The first #001 Nissan Juke-R has been built and tested and has emerged from the Nissan garage. The very first Juke-R was custom built for a buyer in Dubai and is ready for delivery. Nissan says production of Juke-R #002 is well underway and the exact price depends on the precise specification requested by each buyer.

The Juke-R along with the Juke NISMO have also been digitally recreated and are set to star in the new Gameloft Asphalt 7: Heat mobile racing game. Nissan has announced that they have partnered with Gameloft, a leading global publisher of digital and social games, and fans can now have a chance to drive the two Juke stars in Gameloft Asphalt 7: Heat. The game is made available on iOS and Android, smartphones and tablets. Heat allows drivers to compete in virtual races while enjoying single or multiplayer mode.

The Nissan Juke-R started out as a concept car and the decision was made to build a limited run production vehicle. The high-performance Juke-R was built by motorsports outfit RML with advice from Nissan Technical Centre Europe. The team built the real-world Juke-R with more horsepower than the concept. The powerful performance car uses the Nissan GT-R drivetrain and suspension along with an FIA specification roll-cage.

The twin-turbocharged 3.8-liter engine pumps out a mind-numbing 545 bhp and will sprint from 0-62 mph in only 3.0 seconds and has a maximum top speed of 170 mph. The exterior design was handled by Nissan Design Europe in London, UK. The Juke-R gets more definition for the front bumper and new carbon trim on the front and rear cooling vents and the rear aero diffuser.

NDE's Digital Team Manager Darryl Scriven explains: "The Juke-R's bumpers and side sills were redesigned, which is normally a very long process using full size models in clay. However, we managed to condense the development time using full size viewing on our new 3D ready projector and power wall, maintaining a fully digital process while providing a true supercar quality finish to Juke-R."

NISMO who is the high-performance brand of Nissan, designed and built the new Juke NISMO and the 2013 model will be introduced in Europe in January 2013. The NISMO will be powered by a direct-injection turbocharged 1.6-liter performance DIG-T engine which produces 197 horsepower. The engine was directly inspired by the one used in the DeltaWing Le Mans race car.

The performance Juke NISMO will feature a stiffer suspension and a unique body kit designed to reduce lift at high speeds. A special torque vectoring system will also be offered, helping to improve grip and cornering ability. The U.S. launch of the NISMO will be sometime after the European model hits showrooms.

Most drivers will never get a chance to drive the 545 horsepower Juke-R, but it can be driven and raced virtually in the new Gameloft Asphalt 7: Heat mobile racing game. The new game featuring the Nissan Juke-R and 2013 Nissan NISMO will be available to download before the end of the year from both Apple Store and Google Play.

Watch Nissan Juke-R #001 is ready for delivery below