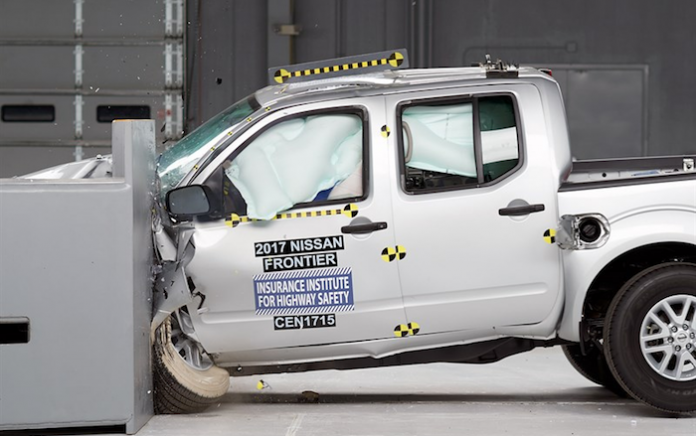 The 2017 Nissan Frontier Crew Cab has earned a four-star NCAP overall safety rating from NHTSA, but it only gets marginal scores in the new small overlap front crash test from IIHS. What does it mean in the real world?

The test replicates a common and deadly accident where the front corner of a vehicle collides with another vehicle or a pole at 40 miles per hour. When engineers measured how the lower leg and foot of crash test dummies handled the crash, the injuries were extensive enough to only merit a “marginal” score for the Nissan Frontier King Cab and the Nissan Frontier Crew Cab.

David Zuby, the Institute's executive vice president and chief research officer said the Frontier has not had a structural redesign since the 2005 model year. Nissan did lengthen the side curtain airbags on Frontier models beginning with 2017 models built after February, to improve protection for people in small overlap front crashes.

In the IIHS crash tests, the Frontier's structure “allowed considerable intrusion into the occupant compartment, compromising driver survival space.” IIHS found the footwell pushed back toward the dummy's legs nearly 17 inches in the crew-cab test and 14 inches in the extended-cab test. The IIHS says, “In a real-world crash like this, the driver would likely sustain serious injuries to the lower legs and left foot.”

The 2017 Nissan Frontier needs a complete remodel and also a redesign for its structure. The 2018 models are arriving now with no structural changes. The new-generation model won’t arrive until next year as a 2019 model. Hopefully Nissan engineers make major changes to the architecture.

John wrote on November 30, 2018 - 4:38am Permalink
In my line of work we see what these cars really do and i can vouch having seen first hand. I wont go into to much gory details but there was severe damage to the persons legs. I dont understand why car companies would still release cars with ratings like these. Fortunately the client was rescued and these was a hospital close by. Good article Denis! John