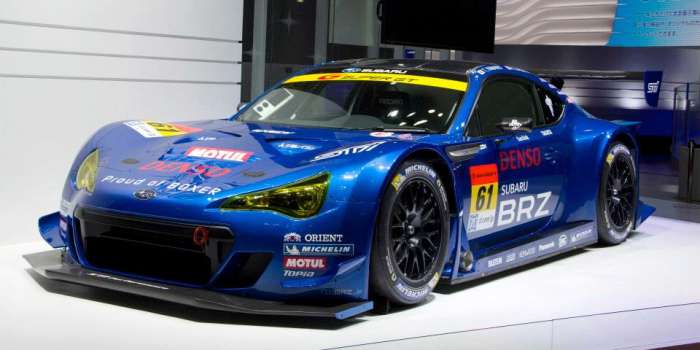 The next challenge begins for Subaru BRZ GT300

The 2013 Subaru BRZ GT300 fell short of expectations when it ran into problems at the FUJI Sprint Cup. The special round of SUPER GT saw the BRZ GT300, competing in the GT300 class, cut short its races and remain in the pit after being hit by problems both days at the Japan race.

This race series is widely regarded as Japan's top motorsports category. After finishing on the podium to end the season last month, the team was hopeful for a good showing at the special round. Driver Sasaki started the first race in 5th place, following the result of the qualifying from a standing start, only to be passed by the competition and dropped to 15th place.

Sasaki struggled throughout the race and was not able to finish due to mechanical problems. Sasaki later apologized, “We have so many fans watching the race and I am terribly sorry about the disappointing result.” The R&D Sport team then got ready for the second race with driver Tetsuya Yamano.

Yamano who had decided to retire from SUPER GT at the end of the event, started in 9th place on the racing grid. Starting slow, he slipped to 12th place after hitting the home stretch. He made a pit stop on Lap 13 when he felt strong vibrations, and he had his tires replaced. However, things didn't get better and he returned to the pit on Lap 20 again where he finally gave up on the race.

It was a disappointing race for the Subaru BRZ GT300 team. General Team Manager Hideharu Tatsumi commented, “I'm disappointed to end the final races of this year with these results. We have been developing our race car throughout the year and we still have an unresolved issue of a mismatch between the chassis and tires in cold weather like today's. Next year we will repeat some tests to overcome this situation. I really appreciate the continuous support that our fans have shown this year. Thank you very much.”

Now the team will begin preparing a new 2014 BRZ GT300 for next years race series in the SUPER GT class. The team will go back to the drawing board and try to identify the problems and weak points in the BRZ race car. It seems that the team has experienced tire issues most of the season. They will need to identify the issues and get them resolved.

The 2013 BRZ GT300 uses the same front-engine, rear-wheel-drive layout as the production 2014 Subaru BRZ that makes everyday a track day for the two-door sports car. The R&D sport team will use what they learned this year and get ready for the 2014 race season.