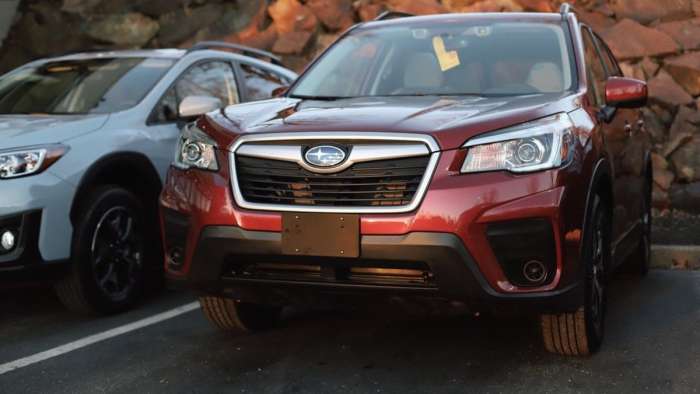 Tiny Subaru is selling more vehicles than ever. See how the new Subaru Forester helped the tiny automaker make gains on Toyota, Honda, and Nissan.
Advertisement

Subaru Corp needed the new 2019 Forester to be a big hit, and they hit a home run with customers looking for an all-wheel-drive SUV. Customers are snatching up the all-new 2019 Subaru Forester at a record clip. It was the best February ever for the Subaru Forester, and the small SUV helped the much smaller brand make gains on it’s largest Japanese competitors, Toyota, Honda, and Nissan who all saw year-over-year declines last month. Subaru of America (SOA) was one of the few automakers that were up last month.

SOA was up 3.9 percent compared to February 2018. February marked an amazing 87 consecutive months of yearly, month-over-month growth thanks to the way customers are responding to the all-new fifth-generation 2019 Forester that arrived late last year. Subaru sold 13,133 new Foresters in the U.S. compared with 11,640 units in February 2018.

Subaru can also thank the all-new Ascent 3-Row family hauler for whipping up on its Japanese competitors. Subaru sold 6,160 new Ascent SUVs last month and it’s on pace to sell over 70,000 units in its first full year. “We’ve been fortunate to generate a lot of excitement throughout our line-up, particularly with our SUVs, and expect that to continue with new additions to our lineup later this year”, says Jeff Walters, Senior Vice President of Sales.

Subaru will launch the all-new 2020 Legacy sedan this summer, and the next-generation 2020 Subaru Outback will also make its dealer launch later this year. The two new models get lots of upgrades and should generate even more excitement with customers.

The completely redesigned 2019 Forester SUV is paying off big for the brand. Subaru also brought the all-new Ascent 3-Row family hauler last year and it’s also a big hit. Consumer Reports just announced their Top-10 picks of 2019 for “Best Cars of the Year” and both Forester and Ascent win their respective categories. Customers are responding in a big way to the new Forester and Ascent all-wheel-drive vehicles. They help tiny Subaru make gains on their much larger Japanese competitors, Toyota, Honda and Nissan that saw their sales shift into a lower gear.

Joel wrote on March 3, 2019 - 10:46am Permalink
Great car for the money. Found to drive with the knowledge that it is the safest car for in it's class. My next car will be a Subaru.
Cygnus wrote on March 4, 2019 - 2:14pm Permalink
Why don't you save all this meaningless chatter about Subaru until the Forester puts up sales numbers month after month like the CR-V, RAV-4 and Rogue do. The Legacy is a joke compared to the Camry and Accord.
MCIman wrote on March 17, 2019 - 6:01am Permalink
The most popular cars are not necessarily the best. It's mostly about the ability of the manufacturer to produce the numbers. Subaru is around the 26th largest vehicle manufacturer so is unlikely ever to have higher sales than comparable Toyota, Honda, or Nissan models. Subaru sales have been increasing year by year in recent years (unlike many other manufacturers). In my view, the new Forester is a better SUV than the CRV, RAV4, or Rogue.