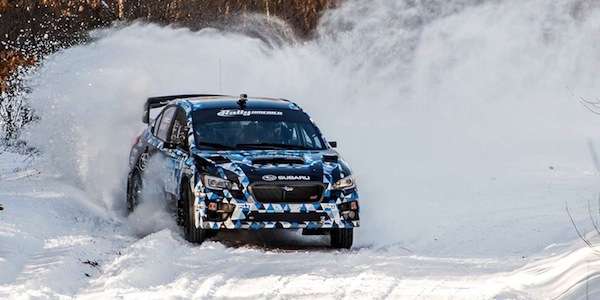 The 2015 Subaru WRX STI leads after 8 stages at Sno* Drift Rally. Tire choice can make the difference between winning and losing.
Advertisement

As with any performance car, running the right tires can make a big difference, especially when running on snow and icy roads. Just having four-wheel-drive doesn’t mean you won’t get stuck when conditions get slick. The 2015 Subaru WRX STI leads Sno* Drift Rally after 8 stages and it looks like Higgins picked the right tires at the Michigan race where eight inches of fresh snow fell within the past 48 hours.

Rally racing in January means there will be deep snow, glare ice and slick edges. Subaru Rally Team USA has to decide which tires will give them the best traction for the changing conditions. Tire choice is an important decision that can have big consequences on stage times. Teams cannot run studded snow tires, so they need to decide whether to run either tires designed for snow, or tires that are better on ice. None of the legal tires for Sno*Drift excel at both.

The team goes with ice tires

David Higgins opted to go with an ice tire, and the decision seems to be a good one because they hold a 3:33.1 lead over the second place team of Adam Yeoman and Jordan Schulze in another Subaru WRX STI. Sno* Drift Rally is more about staying on the road and finishing the race than it is beating the competition. Higgins said, “The conditions are always changing. There was not much snow here when we arrived, but just before the Recce on Thursday it snowed a bunch, but that made it very difficult to read the edges of road.”

Drivers and teams can change tires between stages, but they better make the right decision. Higgins went on to say, “The problem is each one does not work on the opposite surface, and so you have to be very careful to choose correctly for the conditions, even as conditions are changing.”

Day one at 2015 Sno*Drift Rally was very successfully for SRT USA’s David Higgins and Craig Drew with the ice tires. Piloting the new 2015 Subaru WRX STI Open Class Rally car over the first eight stages, Higgins and Drew attacked the snow and ice covered Michigan roads to end day one with a comfortable lead. Day two will see the final 9 stages with a Parc Expose in Atlanta starting at 9am. Stay tuned.

How do you rally on ice? Check out the video.