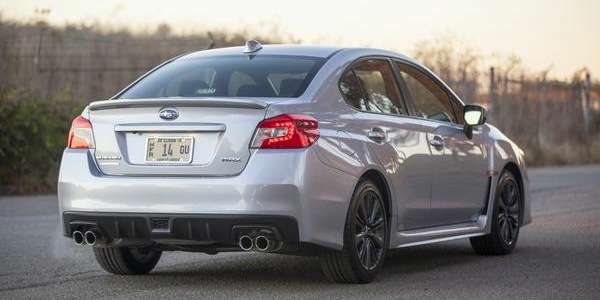 The 2015 Subaru WRX has been awarded ALG’s Residual Value Award. Why will WRX keep performance fans grinning for years?
Advertisement

Some cars just have that ability to make you grin with happiness when you drive them, and the 2015 Subaru WRX is one of those cars. After driving the new WRX performance sedan, it’s definitely high on the fun-to-drive meter. Subaru engineers have significantly kicked up the excitement level from the previous generation model and ALG recognized that the sports car will keep performance fans happy for a long time.

Subaru announced that the 2015 WRX has received ALG’s Residual Value Award along with two other of its stablemates. Subaru WRX won the Best Sports Car, Subaru Legacy Best Midsize Car and Subaru Outback Best Midsize Utility 2 Row. This award is the industry benchmark for projecting future vehicle values and depreciation data. The annual ALG Residual Value Awards honor the vehicles and brands that are predicted to retain the highest percentage of their original price after a conventional three-year period.

WRX gets a redesign

Subaru WRX has a strong following of loyal fans and the Japanese automaker had a goal to have WRX appeal to a wider audience. They seem to have succeeded as WRX has picked up a larger group of conquest performance buyers who have never purchased a Subaru product before. WRX was completely redesigned and gets a new more powerful 2.0-liter turbo engine, a new six-speed manual gearbox and a new CVT automatic transmission.

The new generation WRX/STI is following the lead of the other Subaru models as the Japanese automaker extends it’s performance reach. The real DNA of the WRX/STI has always been its driving dynamics and power attitude. Subaru execs know the driving experience of the new WRX is still paramount with buyers looking for performance. But the all-new 2015 Subaru WRX has been given the huge task of bringing new blood to the brand. Is it working? Subaru reported earlier this year that almost 60 percent of the sales in their entire lineup have been to customers new to the brand. And the WRX/STI is one of the reasons why.

MUST SEE: 2015 WRX/STI attracts larger than ever group of conquest buyers

Subaru builds some of the most fun-to-drive cars around and the WRX/STI sports cars rate highest on the fun-to-drive meter. Consumer Reports just rated the WRX highest on their list for the fun factor and said, “For us, fun is a combination of factors such as handling response, sound, and the nature of the power delivery that lead to grin-inducing satisfaction.”

DONT MISS: Why Subaru WRX and BRZ rank highest on the fun-to-drive meter

This is why the 2015 Subaru WRX will retain its value even beyond the three-year period that ALG says it will retain. These performance cars have intrinsic value that can be measured by their grin-inducing satisfaction. Older Subaru WRX models are still retaining their value after a decade, and the new-generation model is going to be a good value for years to come.