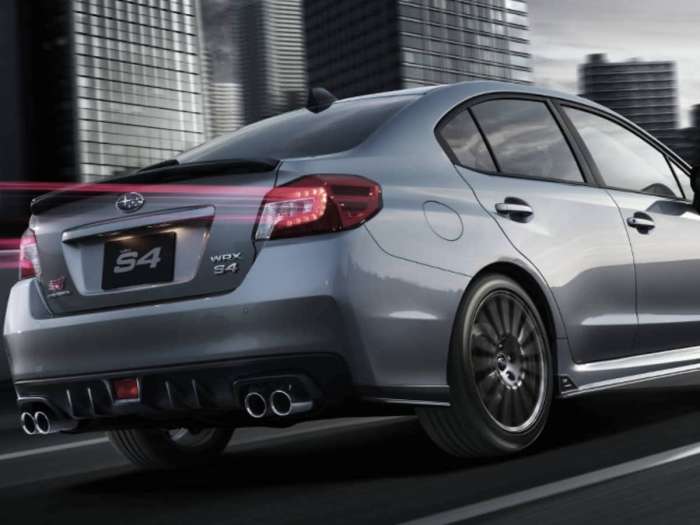 A new Japan-spec 2019 Subaru WRX S4 STI Sport is announced. See how it fulfills a promise made at NYIAS 2015.
Advertisement

Subaru Corporation said they would produce more joint projects with their motorsports partner Subaru Tecnica International (STI), back in 2015 at the New York International Auto Show. We’ve seen a few examples of it, but fans are still waiting for more STI-enhanced models featuring more extensive modifications from the factory such as suspension, performance, braking, chassis and aerodynamic upgrades.

In an effort to make good on that promise, Subaru Corp just announced a new Japan-only 2019 Subaru WRX S4 "STI Sport." What makes it different from the WRX S4? With a joint venture with STI, the driving performance has been improved over the standard sport-tuned WRX S4. The interior and exterior also get unique "STI Sport” treatments.

Underneath, the STI-enhanced WRX S4 gets Bilstein DTMatic Ⅱ front struts, front and rear dampers and coil springs tuned by STI. It also comes equipped with clamp stiffeners for enhancing the mounting rigidity of the steering gearbox. STI improved the ride quality by suppressing the shocks keeping the vertical movement of the performance sedan to a minimum on rough roads. Subaru says the agility and handling of the popular WRX S4 have also been improved.

Inside the new S4 STI Sport comes with Recaro seats trimmed with Bordeaux leather and ultra suede with STI logo, luminescent gauges with a multi-information display, stainless steel side sill plate with STI logo, and a leather-wrapped steering wheel with red stitching.