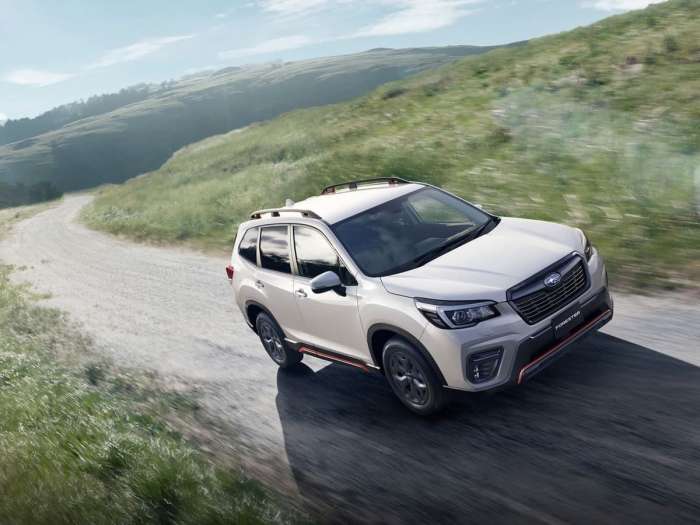 The all-new 2019 Subaru Forester shows up big in its first month with it best October ever. See what other two models had a record month.
Advertisement

Subaru Corporation needed the all-new 2019 Forester SUV to show up big and it has in the first full month of sales. Customers are buying the newly-redesigned Forester in big numbers. Subaru of America reports 15,981 Forester drove off dealer lots which is a record October and a 19 percent increase over the last year 2017. The new Forester outsold every other nameplate in the stable including the Outback (11,574 units sold) which has been number one for all of 2018.

Subaru recorded a record October for the brand with an increase of 2.5 percent thanks to the Forester, Crosstrek, and Ascent. “In closing out October, we proudly reflect on 83 consecutive months of yearly, month-over-month sales increases for the Subaru brand,” said Tom Doll, President, and CEO of Subaru of America, Inc.

It looks the all-new 2019 Subaru Forester will be a big hit with North American consumers. The redesigned 2019 Forester also led the way for Subaru Canada posting its best-ever sales month with 1,688 units sold in October, an increase of 57 percent compared to the same month last year.

Ed B wrote on November 5, 2018 - 10:18am Permalink
Great for Subaru, bad for enthusiats of the brand. Strong sales equate to overconfidence and a sign to management that they know better than the naysayers in terms of performance. Here's hoping they change their tune as sales figures flatten and or slow down. Perhaps a turbo option doesn't totally fall by the wayside in subsequent years. Consider the fact that 2020 is around the corner and we barely noticed the redesign of the 2019 Forester versus the current model. What's left to enhance - dare I say the engine? The new 2019 Acura RDX is on my radar for 2020 and that's unfortunate because I wanted to stay in the Subaru family.
CygnusX1 wrote on November 6, 2018 - 2:42pm Permalink
What does this prove? The number is still not even near the RAV4, CR-V and Rogue sales per month. Subaru did not do enough to make the Forester a "modern" looking SUV. It's body design is still years behind the three mentioned above.