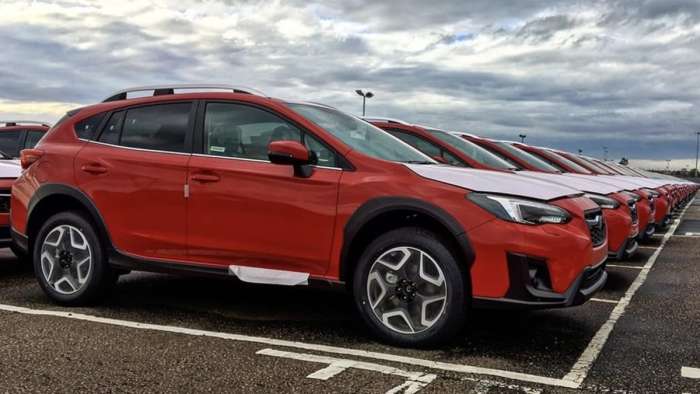 Subaru Crosstrek comes off its torrid sales pace. Is Forester to blame?
Advertisement

When Subaru completely remodeled the Crosstrek for 2018MY, it paid off big last year. Every model in Subaru's lineup posted a sales decline in 2018, except for the new 2019 Crosstrek which saw a sales increase of 31.1 percent to 144,384 units in 2018. But Crosstrek is down in 2019. Is the redesigned Forester to blame?

Subaru can thank the new 2019 redesigned Forester for some of Crosstrek’s drop-off. It hit dealer showrooms last fall and it’s been a big hit with customers. Many likely saw the new changes and opted for the compact Forester SUV ($24,295) over the smaller Crosstrek ($21,895). For the small difference in price, customers get more cargo room, more power under the hood and new safety technology.

Subaru Corp went all out for the new-generation flagship SUV and customers are liking all the upgrades. It’s the second-best selling all-wheel-drive vehicle in the Japanese automaker's stables here in America next to the Outback SUV/Crossover. Crosstrek is number three on the depth chart and it’s close to 20,000 units behind the more popular Forester.

Customers doing their research when looking for a new crossover, have been responding in a big way to the newly-redesigned Crosstrek. They get an all-wheel-drive vehicle that’s comfortable for the city commute, fuel-efficient, gets enhanced active safety, and is recreation-purposed with a go-anywhere attitude.

New 2019 Subaru Crosstrek sales in May will tell if the compact SUV is staying on a downward trend or if the first third of the year was a course correction from the torrid pace the small crosser was on last year.

You May Also Like: Subaru Crosstrek Is Top-3 Hottest New Cars In America

Jeff wrote on May 9, 2019 - 7:47pm Permalink
This is good news. Subaru has stated that until sales started slowing on the Crosstrek they wouldn’t consider making any performance improvements. Other than the electric boost available in a handful of states (with a fairly large decrease in storage capacity), there haven’t been any rumblings of what may be in the future to boost sales. My bet is a new 1.6 liter XT model. That should get up in the very low 200’s for horsepower which would make the Crosstrek a really fun little car to drive and still retain good mileage.
B wrote on May 10, 2019 - 10:14am Permalink
The reason that Crosstrek sales are down is because of a lack of production and inventory availability due to recalls and the plant shut down. The car is insanely hot and days supply is at dangerously low levels.
Nick wrote on May 10, 2019 - 10:35am Permalink
When you look at the numbers in your story why don't you consider the fact that there was a stop sale for the new Crosstrek and Forester but the demand was so high for the Crosstrek it became sold out. People bought the Forester instead. They couldn't keep up production demand even as of today for dealers to have them on their lot. There are plenty of the other models. Crosstrek models are in short supply and high demand. You must not read service bulletins.
Digitaldoc wrote on June 13, 2019 - 3:19pm Permalink
Any thoughts on why the May numbers are down as well? Do the Kona or Kicks have anything to do with the decreases? Is the hybrid not selling too well either?