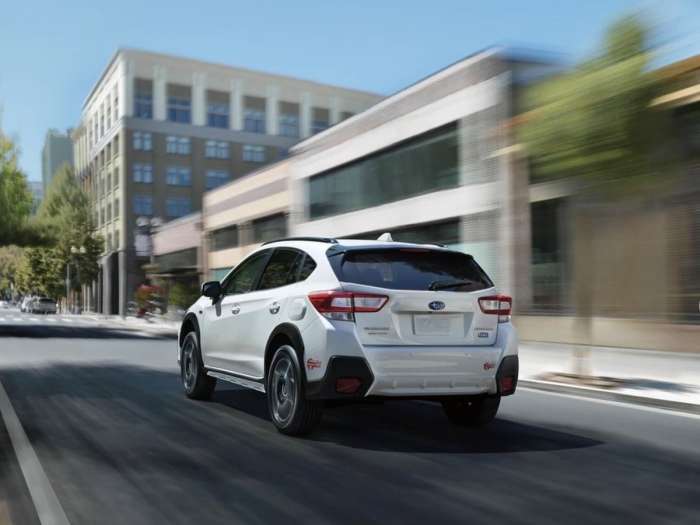 Subaru launches their first-ever all-new 2019 Crosstrek plug-in hybrid. See why it may not be a good fit for you.
Advertisement

Subaru Corp spelled out in their Vision 2020 plan how they could bring a hybrid, plug-in hybrid, and all-electric vehicles using their new Subaru Global Platform. The all-new 2019 Crosstrek plug-in hybrid is their first model to hit U.S. shores that is part of that plan. Subaru did launch a new 2019 Forester e-Boxer hybrid model, but it’s not been announced U.S. buyers will see it.

Customers in the U.S. will get the first-ever 2019 Subaru Crosstrek Plug-In Hybrid with the new architecture offering a combination of electric and gas power. It’s the Japanese automaker’s best-performing, most fuel-efficient Crosstrek ever, but is it a good fit for you?

Subaru uses their StarDrive Technology using two electric motors. One motor functions as an engine starter. Conversely, it can be powered by the engine to function as a generator for the hybrid battery. The second motor powers the vehicle for hybrid and electric driving modes. It also charges the hybrid battery during regenerative braking.

The new Crosstrek crossover allows you to automatically alternate between electric and hybrid drive modes depending on the driver's needs. The Crosstrek PHEV will maintain its all-weather all-terrain capability as the Symmetrical all-wheel-drive system is fully functional even when in all-electric mode.

If owners want to save or charge their battery pack for future use, Subaru offers Save and Charge modes. Save mode uses the gasoline engine more often in order to save the battery for later use. Charge mode uses the 2.0-liter Boxer engine to charge the battery pack in case you don't have access to a charger and want to use EV power later. However, this is the least fuel-efficient mode.

Level 1 (110v) charge time is approximately 5 hour, Level 2 (220v) charge time takes around 2 hours to be fully charged. Active grille shutters and underbody covers create a more efficient air flow for max fuel efficiency. Crosstrek PHEV is the most fuel-efficient model in the lineup getting up to 90 MPGe (on a full charge). The crossover has a total driving range of up to 480 miles. You can manage charge times remotely with the MySubaru app.

What does MPGe mean?

MPGe is a metric used to compare the relative efficiency of alternative fuel vehicles to gasoline vehicles. So in pure electric mode, the Crosstrek Hybrid is as energy-efficient as a gasoline-powered vehicle rated at 90 mpg.

What kind of driving will you use it for?

When the battery is low, the Crosstrek acts like a regular hybrid and will use both gas and electric power to deliver around 35 mpg combined city/highway. The Crosstrek is able to achieve an all-electric range of 17 miles, so if you have a short commute (less than 9 miles one way), you will be able to run on EV, rarely use the gas engine, and have the ability to charge the battery at home every night.

The Crosstrek PHEV has less cargo space because the battery pack is mounted below the cargo area. Cargo room is down from 20.8 cubic feet behind the rear seats to 15.9 cubic feet. Cargo space with the rear seats folded flat is 43.1 cubic feet, less than the 55.3 found in the regular model. So if you need more cargo-carrying ability, the plug-in hybrid may not be a good fit for you. For customers wanting to tow a small trailer, the new plug-in hybrid has a towing capacity of up to 1,000 lbs., 500 less than the non-hybrid's 1,500-pound limit.

Subaru offers the 2019 Crosstrek Hybrid in one loaded trim starting at $35,970 (including destination) before EV rebates. Opting for the one available package will cost you another $2,500 for a moonroof, upgraded sound system, heated steering wheel, and integrated navigation, bringing the pre-rebate total to $38,470. That might sound like a hefty amount, but those who qualify for federal tax credits and state rebates can significantly reduce the vehicle's overall cost while saving money at the pump.

How much will you save?

You could qualify for up to $4,500 federal tax credit and up to $1,500 in local/state credits, and around $350 annual savings on gas cost. The all-new 2019 Subaru Crosstrek Plug-in Hybrid cost could be as low as $28,995 after tax credits. See what benefits you can apply for here depending on where you live. Subaru will likely roll out the new crossover is California and the states that have passed zero-emissions laws first. Reports say Subaru Corp will only build “limited quantities” of the new 2019 Crosstrek with electric technology. The Crosstrek Hybrid will be sold in every state but customers wanting their new vehicle now could be waiting for a while in some states after it’s ordered.

SubaStar wrote on December 11, 2018 - 1:02pm Permalink
I've seen many photos of this new Crostrek Hybrid. Nice combination of gas Boxer, 2 electric motors and the SAWD. Most surprising: "the battery pack is mounted below the cargo area": looks really like DIY crafts. The SGP was not supposed to offer a better integration of it in the chassis?
DeanMcManis wrote on December 11, 2018 - 2:41pm Permalink
It seems like a good model for Subaru to release. It's not going to meet everyone's needs, but it is an important product gap filler for Subaru to offer a plug-in hybrid model. For a commuter car, this is the only Subaru that I would consider buying because I need access to the HOV-commuter lane.
Bill Camarda wrote on December 14, 2018 - 6:09pm Permalink
We're very happy with our Chevy Volt, but our second car is a Subaru AWD, and my wife's hoping to eventually replace it with another AWD that's a plug-in hybrid or all-electric -- preferably a Subaru. So we were eagerly awaiting this (and you'd think we'd be a fairly prime prospect for them). But just 17 miles all-electric would be a huge step backwards for us. I understand AWD uses some power, but I can't see this working for us. When you said "See why it may not be a good fit for you," I was really hoping you'd be wrong. You weren't. We'll keep waiting. Maybe we can nurse the Outback through a couple more years.