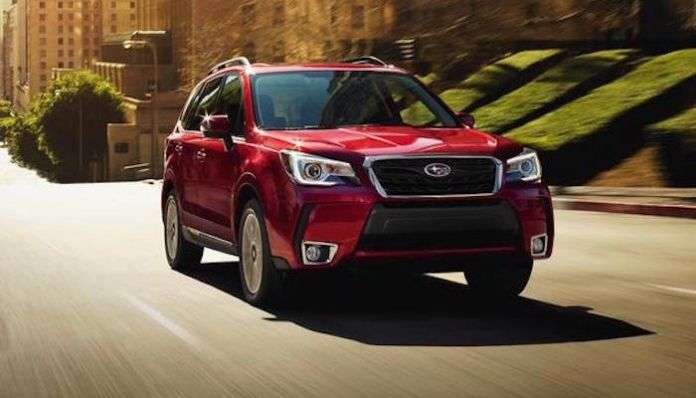 As the all-new Subaru Ascent family hauler took the spotlight, the aging Subaru Forester is red hot with record sales and it gets a top award.
Advertisement

With the unveiling of the new 2019 Subaru Ascent 3-Row family hauler in LA, the Forester was the forgotten SUV in the lineup this week. But it didn’t stop consumers from buying the 2018 Forester in record numbers, and it gets a top award from ALG.

Subaru of America reported 51,721 vehicle sales for November 2017, a 0.8 percent increase over November 2016. The automaker also reported the 2018 Subaru Forester was notably strong and achieved its best November ever up 0.5 percent over the previous year’s numbers. Forester hit 14,662 units sold and is the brand’s number two selling vehicle in the lineup behind Outback. YTD, Subaru of America has sold 160,122 of the all-wheel-drive SUVs and it’s at the end of its life-cycle.

Subaru’s Forester small SUV will be the next model in the brand’s stable to get the new Subaru Global Platform. True to Subaru’s 5 year life-cycle, the Forester is next in line to get a remodel. The fourth-generation Subaru Forester, introduced in 2013 as a 2014 model, is showing its age and it’s ready for a complete makeover, and the new-generation model will arrive next year. Even though it’s aging, Forester is still making news and gets a top award from ALG.

For the third year in a row, Subaru was honored with the “Best Overall Mainstream Brand” Residual Value Award from ALG. Along with the top honor, the 2018 Forester along with four other Subaru models earned awards in their respective segments.

“Coming off the recent 2018 ALG Residual Value Awards (RVA), we are very pleased that our brand and products are receiving recognition and contributing to our ongoing success,” said Thomas J. Doll, president and COO of Subaru of America, Inc. As ALG noted, “Awards across sportscar, traditional passenger car and utility segments display the depth of the Subaru vehicle portfolio.”

The Subaru Forester has been a favorite in the small SUV segment and leads with its legendary all-wheel-drive capability, high efficiency, safety and cargo-carrying ability. ALG says, “The Compact Utility segment is red hot and the Subaru Forester is leading the pack in terms of residual value forecasts taking home the ALG Residual Value Award for 2018.”

The 2018 Subaru Forester took a backseat to the all-new Ascent 3-Row this week as it was unveiled at the LA Auto Show, but Forester is still making waves.

Ed B wrote on December 6, 2017 - 1:02pm Permalink
The Ascent will sell well. I'm a baby boomer and empty nester, so I don't really need all the space. I'm just fine with my Forester XT. Rest assured, I'll upgrade once the new Forester is ready. Subaru is pushing all the right buttons, I'd just like to see a little more style with the substance...
Diana S wrote on December 10, 2017 - 2:44pm Permalink
I just purchased the 2018 Subaru Forester. This is my first Subaru and I absolutely love it. I previously owned a 2015 Toyota Rav 4 the comparison between the two are night and day.The Subaru Forester far out exceeds my expectations of the 2 the Rav 4 was sluggish had no power the interior was poorly made in the winter the front defroster was poor. Now the Forester I am in love with very well made only thing I don't like is the windows could be a little better as far as the rear window a little too big . All in all love this suv.