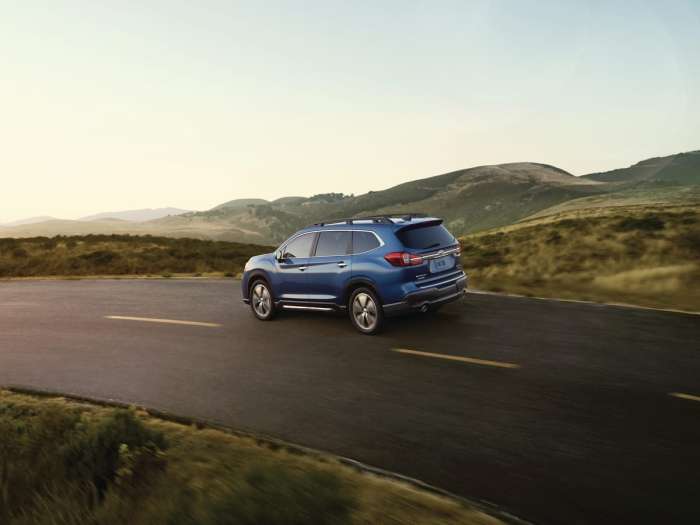 Sorry Australia, Europe, and Japan, Americans are the only ones to get the new 2109 Subaru Ascent 3-Row family hauler.
Advertisement

Americans are the only consumers who will get the all-new 2019 Subaru Ascent and all other global markets will get left out. Ascent won’t be sold in Australia, Europe, Japan or any other global markets. It’s Subaru’s biggest vehicle they’ve ever produced and it’s designed for North American families.

The 2019 Subaru Ascent crossover was designed in Japan, but it’s built in Lafayette, Indiana. It’s what North American Subaru dealers and consumers have been asking for. Subaru dealers in the U.S. told Subaru Corp the new Ascent needed to be larger than the Japanese automaker originally had planned and they listened. Subaru dealers in Australia also want it, but Subaru Corp isn’t listening, they will only be able to look and not touch.

The main reason Australia and the UK won’t get the new Ascent family hauler is that it’s built in the U.S. as a left-hand drive vehicle. According to a report from CarAdvice, Australia wants the Ascent, and Subaru Australia managing director, Colin Christie told them, “I think one of the challenges is we are the largest right-hand-drive (RHD) market outside of Japan [for Subaru]. We’d love to have that product for Australia.” The primary reason is it costs a lot of money to tool a factory to produce a car in both right-and left-hand drive, money which needs to be returned through lots of sales.

In the U.S., Subaru is cashing in on the crossover craze that is driving Outback, Forester and Crosstrek sales in the U.S. to new records every year. Now they want to continue that trend with the Ascent 3-Row family hauler. The new 3-Row Ascent allows Subaru to enter a whole new large vehicle segment they've been missing until now. It allows their current customer base of young millennials to move up in size as their family grows, and the brand is also expecting many of Ascent buyers to be conquests from other brand’s vehicles.

Subaru’s new 2019 Ascent will compete with Japanese rivals like the Toyota Highlander, Nissan Pathfinder, Honda Pilot, Mazda CX-9, and American entries like the Ford Explorer, Chevy Traverse, Dodge Durango and Jeep Grand Cherokee. Ascent will only be, produced as a left-hand drive vehicle and RHD consumers in Australia, UK and Japan can only look and not touch.

Tyson wrote on July 3, 2018 - 1:08pm Permalink
The Ascent is also going to be available in Canada, not just the USA.
C.G. OUIMET wrote on July 4, 2018 - 5:25am Permalink
Subaru wasn't listening to the many North Americans wanting the Levorg either ...
Tyson wrote on July 7, 2018 - 11:44am Permalink
Is the Levorg essentially not just a WRX/STI hatch? Or would it be closer to a legacy wagon with a turbo?
Robin Ancheta wrote on July 8, 2019 - 6:18pm Permalink
bring the Ascent down under - Australia
Liddy Sanders wrote on October 25, 2019 - 1:50am Permalink
I probably can’t speak for Australia , but there is a massive market for Subaru in New Zealand and we are losing customers who drive Subaru who need the 7 seater SUV’s. They are all buying Mazda CX-9 or Santa Fe’s or Volvo’s or anything else! Please Australia can you bring in the Ascent , I will round up Kiwis who are loyal to Subaru to buy these family cars!
Robin Ancheta wrote on January 28, 2020 - 11:01pm Permalink
I have a forester. It is already 12 years old . I’m looking for 7 seater , unfortunately Subaru has no plan to bring the 7 seater down under. Hoped they changed their mind.
Jim Moodie wrote on January 28, 2020 - 1:05am Permalink
The Accent and Toyota’s Highlander are made in the same shared plant barely competition Toyota owns 20% of Subaru. The accent is also only available with a single engine choice in Canada the Toyota Highlander hydrid would be my choice, made properly in Japan. Impreza cheap models made in Indiana, better ones come from a Japan.
Robin Ancheta wrote on January 28, 2020 - 11:07pm Permalink
The hybrid in highlander ( Kluger here in Australia) will be available by 2021. I always ask the dealer here what are the Japan made cars. Forester and outback are good. But only 5 seater. 7 seats Subaru.