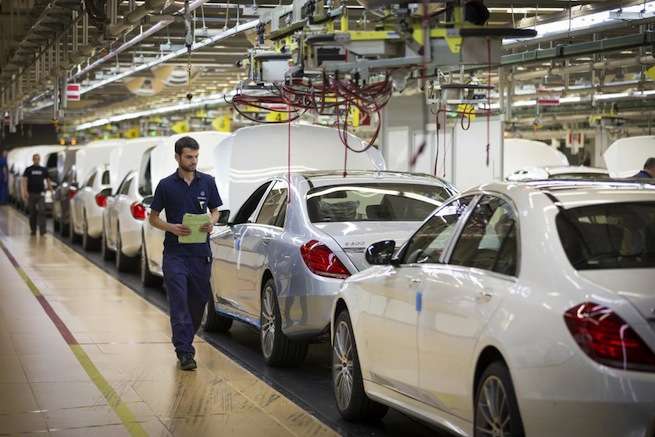 New S-Class achieves never before seen record for the brand

The new 2014 Mercedes-Benz S-Class has been launched globally and has achieved a record for the German automaker that makes it even more special.
Advertisement

“S” in S-Class stands for special and as the new luxury saloon launches globally, it has achieved something very special indeed. Mercedes just released some interesting numbers that have never been accomplished by the brand before in its 127 history of making automobiles. Production for the all-new 2014 S-Class was launched worldwide within three months of its unveiling. This was the result of the production of the new Mercedes flagship being started in record time.

The new luxury saloon is already the market leader in Germany and neighboring European countries after one month of its launch. It’s also now available in China and the U.S. markets which should also see good customer response. Mercedes was able to introduce its flagship model into the top three S-Class markets in the world in less than twelve weeks, making the S-Class launch the fastest ever in the company's history.

The main competition for the S-Class will be the new Audi A8 that just won the Car of the year award from the UK’s-based T3 magazine. Ola Källenius, Member of the Divisional Board Mercedes-Benz Cars responsible for Marketing & Sales said in the press release, “Since its launch three month ago, the new S-Class has already jumped back into the lead in terms of new vehicle registrations in Germany and its neighboring European countries, seamlessly building on the success of its predecessor. Our customers around the world are raving about the cutting-edge design, the exemplary efficiency and the groundbreaking safety systems of the new S-Class."

It all started in the mid-1950s when the Mercedes-Benz 220 model laid the foundation for the S-Class series. Since its inception, Mercedes-Benz has sold over 3.5 million S-Class vehicles all over the world. Just last year, the previous generation saw the German luxury brand delivered over 65,000 S-Class vehicles.

The Chinese have been purchasing more S-Class luxury sedans than anywhere else around the globe. After China, the U.S. is the second-largest market for the S-Class. Mercedes reports that last year, more than two thirds of all luxury sedans sold worldwide went to customers in these two countries. Customers in China and the U.S. get the extended wheelbase variant that are 20 centimeters longer than the European model.

In order to pull of the record S-Class launch time around the globe, Mercedes invested heavily into their plant in Sindelfingen. Between 2011 and 2014 550 million euros were invested and this year alone, investment in the Sindelfingen plant is set to total around 1 billion euros.

Mercedes-Benz has set the bar for luxury saloons extremely high. The new 2014 S-Class will be hard to beat for top rival Audi and the new 2014 A8.