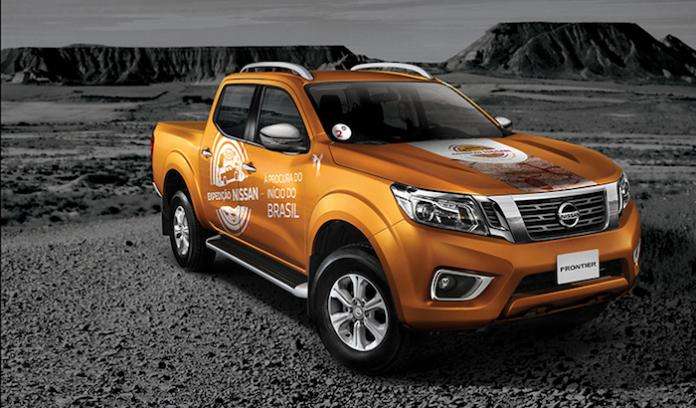 The new-generation Nissan Frontier hasn’t arrived in the U.S. yet, but it’s already going back in time by exploring Brazil’s archeological sites.
Advertisement

Nissan South America is using the 12th-generation Frontier pickup for an exploration in Brazil. You won’t see it in the U.S. just yet. The Japanese automaker says they will use the new Nissan Frontier mid-size pickup that has already hit local dealerships in South America in March this year. North Americans will have to wait to use the pickup on off-road expeditions like those in South America.

Nissan started operations at its Resende Industrial Complex, in Rio de Janeiro, in 2014. Nissan is increasingly integrating into the local community and backing the country's cultural and social development. The new Frontier pickup is at the core of the new Brazilian archeological expedition and will be used to show it’s off-road capabilities.

A fleet of the new Nissan Frontier pickups will take journalists and guests back in time via on- and off-road adventures to Brazilian states including Piaui and Minas Gerais. Nissan says, “Guests will visit archaeological sites and have an immersive experience with researchers, archaeologists and many others who work to protect the sites.” The first stage of the "Nissan expedition: on the search for Brazilian origins" starts today, September 26 in Minas Gerais.

The 12th-generation Nissan Frontier is the vehicle chosen to lead the trip, called "Nissan expedition: on the search for Brazilian origins." The project target is to promote the country's significant archeological sites, some of which are recognized by the United Nations for their importance to the collective interest of humanity.

The next-generation Nissan Frontier will make it to U.S. shores and it will be built at the their plant in Canton, Mississippi. Nissan has not confirmed when the new Frontier will start production, but it will likely be a 2019 model and roll off the assembly line next year.

Nissan already sells the new-generation Nissan Frontier in Brazil and it’s off-road prowess will be on display starting today in South American on a search for Brazilian origins. North Americans will have to wait awhile longer to use the next-generation 2019 Nissan Frontier for off-road excursions.