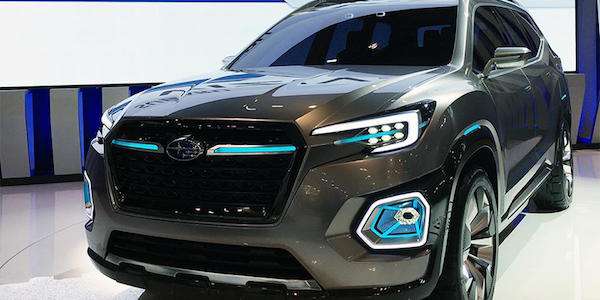 New 3-Row Subaru Concept Makes its Rounds; Why Active Families Will Want One

Subaru’s new 3-Row Concept was just unveiled in Toronto. Why will the new Subaru 7-seater be for active North American families?
Advertisement

The VIVIV-7 SUV Concept just unveiled at the 2017 Canadian International AutoShow in Toronto, reveals an idea of what families can expect when the new Subaru 3-Row crossover arrives in 2018. Why will it only be sold in the U.S. and Canada? Subaru learned their lesson with the discontinued Tribeca 7-seater that never really caught on with consumers. It was too small for the North American market, and the styling was boring. SUV buyers want something bigger for their families. Subaru listened to their U.S. dealers, and a new bigger SUV is coming.

The new Subaru crossover will have full 7-seat capability

The new mid-size SUV will be the largest in the history of the Subaru brand. The new vehicle will be bigger, wider, longer and will easily accommodate the third row which will be standard on the new Subaru crossover. The new architecture will also allow for a roomier interior without making the outside dimensions larger.

The VIZIV-7 SUV Concept accurately portrays the size of the coming production model. It’s longer, wider and higher than the Tribeca, with a length of 204.7 inches vs. 192 inches. It is 79.9 inches wide, an increase of nearly 6 inches compared with Tribeca. With a height of 72 inches, it is 4 inches taller than the Tribeca. It’s what U.S. and Canadian Subaru dealers and consumers have been asking for.

The Tribeca was a city-car and it didn’t have Subaru’s go-anywhere attitude. The new 3-Row Crossover will be built specifically with North American urban-adventurers who lead active lifestyles. Families will haul the kids to school and to sporting events during the week, and use the vehicle on the weekend for biking, hiking and skiing excursions. With standard all-wheel-drive, it will have a go-anywhere attitude like its top-selling Outback, Forester and Crosstrek stablemates.

Subaru will design the new 3-Row crossover with young families in mind, and grandparents who need to transport the grandkids. It will come standard with Subaru’s Symmetrical AWD system and it will compete with the Toyota Highlander, Ford Explorer, Chevy Traverse, Dodge Durango and Jeep Grand Cherokee. More on Page 2.

The 3-Row crossover will likely be unveiled at the 2018 North American International Auto Show in Detroit. It will be produced at the Subaru of Indiana Automotive (SIA) plant in Lafayette, Indiana, specifically for the North American market. It won’t be sold anywhere else around the globe. The new Subaru 3-Row SUV will arrive in showrooms in mid 2018, and it’s designed for active North American families.

JGinNJ wrote on February 20, 2017 - 8:34am Permalink
It will fail if it is under powered. Which engine do they plan to use? The standard flat four, without the turbo, is already marginal in the other Subaru models.