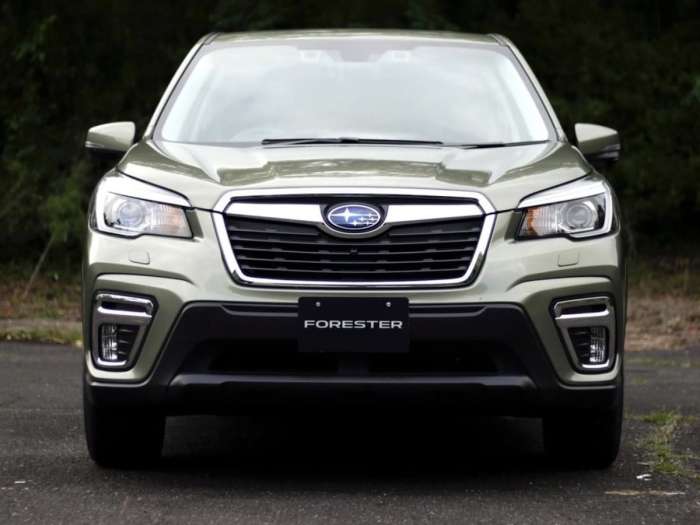 Subaru Corp is hoping the all-new fifth-generation 2019 Forester is a success around the globe, and it looks like it will be if pre-sales in Japan are any indication. Subaru opened the new 2019 Forester pre-sales in Japan on June 20, 2018, and orders are already five times more than expected. And sales of the new Forester e-Boxer Hybrid also surprised with the new model accounting for 40 percent of the total.

Total pre-sales of the newly-redesigned Forester have been 13,282 units as of September 13, more than five times more orders than the monthly sales plan of 2,500 expected for the new SUV. Subaru says 33 percent of those models are Premium trim, 18 percent X-Break, and 9 percent Touring models.

The Advanced e-Boxer Hybrid is going to be a big hit with customers in Japan with the new hybrid accounting for 40 percent of the total new 2019 Forester SUV orders. The new hybrid was announced in April using the newly-updated 2.0-liter direct injection horizontally opposed boxer engine coupled with electric technology producing the "e-Boxer". Subaru says it will offer improved performance and fuel-mileage over the standard 2.5-liter Forester Boxer.

Subaru Forester is brand’s top-selling nameplate around the globe, and the Japanese automaker is counting on the newly-redesigned small SUV to be a big hit not only in Japan but in the U.S., their number one market. If Japan pre-sales are any indication, the newly-updated 2019 Forester is already exceeding expectations. The new SUV begins arriving in U.S. showrooms next month.

Mark Salopek wrote on September 14, 2018 - 11:57am Permalink
Now that Subaru has new management at the top with Tomomi Nakamura, is there a possibility that the strong pre-sales numbers for the e-Boxer in Japan may make Subaru rethink their decision NOT to offer this option in the US? In all of the online articles and reviews I've read recently concerning every Subaru offering using their new global platform (e.g. Impreza, Crosstrek, Ascent, and now the Forester), the limitation of one engine choice in the US market is by far the biggest complaint shared by everyone. In addition to this, the absence of a hybrid option only compounds this problem. Maybe it wouldn't be so bad if every engine they decided to use had higher HP and torque ratings, but the engine choices that they ended up going with as the sole power plant in each model are under-powered, and therefore leave consumers wanting for more.
Ed B wrote on September 17, 2018 - 9:39am Permalink
I concur Mark. I suspect these will sell well regardless. The enthusiasts can pretty much ditch the hope of a turbo coming back to the Forester. My concern is Subaru takes this one (under-powered engine) fits all approach to the 2020 Outback and Legacy global platform updates. I will keep my 2017 XT and see what transpires in 2020. I may exit the brand if this assault on HP continues at Subaru. Yes, MPG is important - but HP is this segment is a plus. I'm taking a hard look at the new Acura RDX - the turbo 4 and super-handling AWD are back.
Digital Doc wrote on September 14, 2018 - 5:41pm Permalink
Just means they set the expectations low...
SubaStar wrote on September 16, 2018 - 3:57pm Permalink
Initially, Subaru created a worldwide new niche we could describe as "Light, Powerful and AWD SUV's", first launched in WRC with the WRX. Today, the brand seems to ignore completely its sporty and glorious history and proposes us a bland range of AWD SUV's, like everyone else. Subaru, where and why did you leave the "Light" and "Powerful"?
Digital Doc wrote on September 17, 2018 - 11:02am Permalink
Totally agree. The lack of optional engines in the Crosstrek and Forester caused me to buy elsewhere. If they want a prerequisite to buy a Subaru to have an AARP card, they are doing a great job. Enthusiasts should look elsewhere. Their new Ascent is selling well, and they should take a hint as it looks to have adequate ponies under the hood.
Ed B wrote on October 2, 2018 - 4:32pm Permalink
Today, I went on the Subaru website to see if the new Forester was loaded into the site and available to price with options, etc. Funny, I went to the comparison page and upon review, said to myself - What's the point. There is essentially no significant differences from the base model to the touring model. The safety features are basically the same with the exception of the new facial recognition tech in the touring model. No surprise, we were warned about the one engine fits all approach. What a BORING line up!!! The price difference between the base and touring is roughly just over $8K. What's the incentive for a customer to buy much beyond the base to Sport or Touring and pay extra dollars for essentially nothing significant (feature wise) in return? Subaru is on a roll, we'll see just how popular this new Forester is in six months. I suspect the excitement to taper off in 3-6 months as folks really take a hard look at what's offered here. No question, it's a sound vehicle but this is truly a car for the masses, right off the proverbial assembly line. There's no passion or uniqueness to this next Gen Forester...

LG's New EV Battery Plant Is a Welcome News for Tesla
Tesla Giga Berlin's New Hurdle: It's Not Only the Gov't, but Now Tesla Itself
END_OF_DOCUMENT_TOKEN_TO_BE_REPLACED