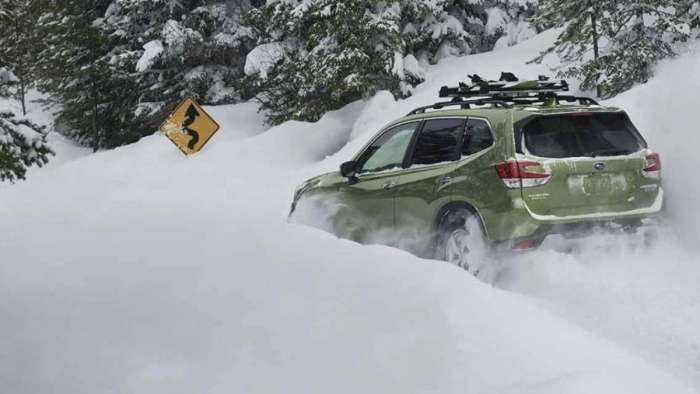 The all-new 2019 Subaru Forester is taking consumers by storm. If you need an extreme winter vehicle, see why Forester is the best choice.
Advertisement

If you've ever been in a winter snow storm and your vehicle left you stranded because of deep snow, you know how scary and frustrating it can be. If you need a winter vehicle that won’t leave you stranded when the snow flies, or better yet if you need an extreme vehicle for off-road use, Subaru Corp brings the new fifth-generation 2019 Forester for winter warriors. Consumers in North America who need all-wheel-drive are responding in a big way to the redesigned Forester SUV.

In Canada, the all-new Forester SUV posted its best December ever with 1,309 units sold, a 30 percent increase over the same month the previous year. The SUV was the best-selling nameplate in the lineup beating the popular Crosstrek and all-new Ascent family hauler.

Forester was also a hit in the U.S. with Subaru of America selling 17,642 units in December up 1.2 percent over the same month last year, and 171,613 total sales for 2018. Forester was the only all-wheel-drive vehicle in the lineup with positive growth for December besides Ascent which hasn’t had a full year of sales yet.

Do you need an extreme winter vehicle?

In Canada, the Northern U.S. and Rocky Mountain states where the winters are cold, snowy and the roads can be treacherous, Forester is a popular choice because of its 8.7-inch ground clearance and all-wheel-drive all-weather capability. Another reason consumers are finding the Forester appealing is its off-road system called X-Mode that is used in more extreme situations. For the owner who wants a vehicle that will be used for more than a grocery hauler, and wants to explore the Rockies, this vehicle is rugged enough to handle it.

Forester owners have typically been an adventurous group who don’t leave their cars in the garage when the snow flies and take their all-wheel-drive vehicles four-wheeling on the weekends and Holidays. Some owners even modify their small SUVs with lift kits, bigger tires and wheels, and engine mods. They will use the Forester to enjoy extreme winter sports in the mountains around the globe.

Even a stock Forester with no modifications can be used for winter adventures like getting to the trailhead for cross-country skiing, over the pass to the ski resort for snow-shoeing, snowboarding, and sledding. Subaru seems to have done a good job on the all-new 2019 Subaru Forester that launched in October. For those who lead active lifestyles, it’s a good fit because of its extra ground clearance, all-weather all-wheel-drive capability, and extreme off-road abilities.

Gene Allmendinger wrote on January 5, 2019 - 11:54pm Permalink
I own a 04 Forrester and it's been the best I have ever owned. Hannds-down.
Dan Guay wrote on January 6, 2019 - 11:49am Permalink
Not sure what the stock tires are on the 19's, but on my 2015 XT the tires were crap and I was able to get it stuck in not that much snow. All the new bells and whistles prevent you from really "gunning" it out of snow like my 08 Legacy had no problem doing.
John wrote on January 6, 2019 - 8:40pm Permalink
I don t see how the forester beats any jeep on snow mode awd locked wheels etc etc.
John Goreham wrote on January 7, 2019 - 10:58am Permalink
If you are already familiar with locked differentials and how they behave when driven, try a Subaru. Locked diffs are the opposite of what you want in real-world snow conditions. Locked Diffs add very little when starting in snow and they are a problem once underway and you need to turn. Jeeps like Cherokees and Grand Cherokees are great in snow. Wranglers are also great in the occasional snowpocalypse (and they can be fitted with plows), but on the way to work in the snow, headed to a ski destination you expect to be snowed in, or just heading out when the snow keeps everyone else in, nothing beats a Subaru Forester or Outback. Give it a try.
Marty R wrote on August 5, 2019 - 9:44am Permalink
John Goreham, that couldn’t have been summed up any better! Tires make a big difference but I agree with what you said I have a 16 Forester and don’t need a locked diff
John Goreham wrote on January 7, 2019 - 10:54am Permalink
My '16 with Blizzaks is the best winter vehicle I have ever driven. Except possibly the newer X Mode-equipped Foresters. I became a convert to AWD and winter tires when I worked in Quebec. The AWD system gets you started in the deep stuff and the winter tires enable superior turning and stopping. Best of all, it is seamless. Simple.
MB wrote on January 28, 2019 - 8:08am Permalink
Do I really need winter tires with the X mode and other controls? I live in NH and just traded in my old Subie for the 2019 Forester. Love it Question: you say that "Even a stock Forester with no modifications can be used for winter adventures like getting to the trailhead for cross-country skiing, over the pass to the ski resort for snow-shoeing, snowboarding, and sledding." I saw another in Québec say that they got winter tires. So, I am wondering if winter tires is an unneeded 500+USD? Thanks for your input
Dan wrote on January 29, 2019 - 12:47pm Permalink
"needed"? Probably not. But everything works better in the snow with snow tires! I haven't bought a set for my forester either.. but eventually I will :)
Ronald Kluger wrote on June 28, 2020 - 9:39am Permalink
Quebec has a law that requires winter tires. So, the person had no choice, I live in Ontario and have a 2017 Forester (and 1995 and 2006 Legacy wagons) and have not used snow tires - but I have made sure that the all-seasons have good ratings for snow in Consumer Reports. The winters are milder now and the roads are salted here. All seasons tires are much better on wet roads and dry roads than winter tires, which is the more common situation.

LG's New EV Battery Plant Is a Welcome News for Tesla
Tesla Giga Berlin's New Hurdle: It's Not Only the Gov't, but Now Tesla Itself
END_OF_DOCUMENT_TOKEN_TO_BE_REPLACED