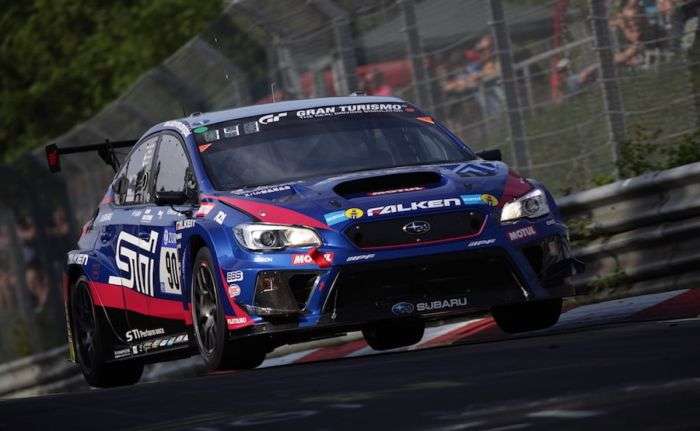 The 2018 Subaru WRX STI ran in the SP3T class for turbocharged vehicles up to 2.0 liters, a class many leading European manufacturers like Audi (Audi TT), Volkswagen (VW Golf 7 TCR) and Opel (Opel Astra) entered this year.

The 2018 Subaru WRX STI, which is based on the production STI, started the race from the pole position earned in qualifying, then after 1 hour from the start, oil leaked from the hydraulic system of the power steering and the STI had to be brought in for repairs. The team lost 3 laps 48 minutes against the competition from Audi and Volkswagen and slipped to third place.

The four drivers, Carlo van Dam (Netherlands), Tim Schrick (Germany), Hideki Yamauchi (Japan) and Takuto Iguchi (Japan), pushed the WRX STI hard and closed the gap with the leaders and regained the top position after 10 hours from the start of the race.

The weather turned worse, with rain and fog, but the WRX STI’s Symmetrical all-wheel-drive kept the performance car going strong and even passed upper-class competitors with larger engines. With 4 hours remaining in the race, dense fog interrupted the race, the red flag came out and stopped the event. After 2 hours, officials restarting the race, but there was another problem with the WRX STI.

The WRX STI NBR race car developed another engine problem and had to return to the pit area an hour before the finish. The six-member tech team fixed the issue and the STI finished the race with a win in SP3T class and took 62nd overall.

The victory is a testament to the Subaru WRX STI’s all-wheel-drive performance on circuits such as the Nurburgring, also known as the “Green Hell”, which is one of the most challenging and dangerous tracks in the world. Congratulations to Subaru and Subaru Technica International for winning their 5th Nurburgring 24-hour race.