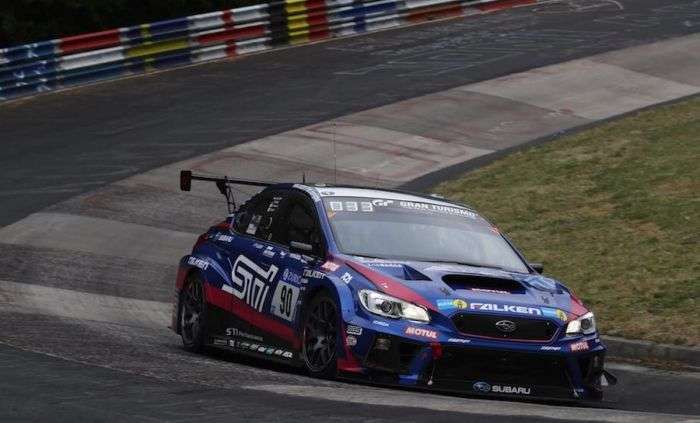 Subaru enters the 2018 WRX STI in the 46th Nurburgring 24-Hour Race. Can they win their 5th class title?
Advertisement

Subaru Motorsports returns today and will attempt three wins in four years. Subaru has won the SP3T class four times, in 2011, 2012, 2015, and 2016. The 2018 Subaru WRX STI runs in the SP3T class for turbocharged vehicles up to 2.0 liters, a class many leading European manufacturers will again enter this year.

Subaru attempts to win this year’s race with the car much improved from the one that missed out on the podium last year. Last May with only three hours to go, the 2017 Subaru WRX STI NBR suddenly caught on fire and was forced out of the race. STI has the enhanced reliability in the 2018 WRX STI with improved engine output, optimized gear ratio and larger diameter brake rotors.

Subaru also brings six techs selected from Subaru dealers around Japan who will be the team supporting the race effort. Subaru has had dealer mechanics participate in overseas auto races since 1990, a unique initiative aimed at improving the technical skills of its mechanics. Through the end of 2017, 357 Subaru techs had taken part in Safari Rallies, World Rally Championships, and the Nurburgring 24-Hour Races. Can the Subaru WRX STI win its 5th class title? Stay tuned.

Panasonic Updates Profit Forecast, Noting How Much Tesla Batteries Help The Jump
2022 Porsche 911 GT3 Laps Nurburgring in 7:04 With Journalist Behind The Wheel
END_OF_DOCUMENT_TOKEN_TO_BE_REPLACED