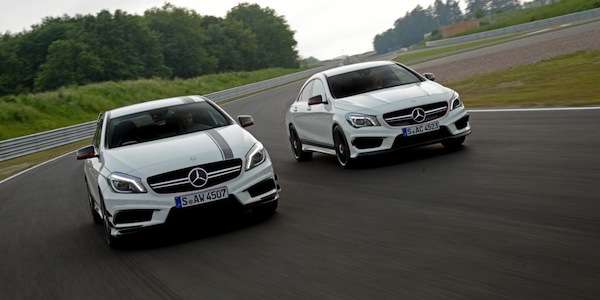 With the introduction of the all-new 2014 Mercedes-Benz CLA-Class, it opened doors for the A 45 AMG and CLA 45 AMG. Mercedes-AMG sees a record year.
Advertisement

So you think with the advance of smaller more fuel-efficient economy cars that performance cars are dead? Don’t tell that to Mercedes-AMG, the performance arm of Mercedes-Benz. They just finished their strongest year with close to 32,200 AMG performance vehicles sold globally in 2013. Part of the success was due in part to the successful entry into new segments with the Mercedes A 45 AMG and 2014 CLA 45 AMG. Performance is alive and well at Mercedes-AMG.

That’s good news for performance fans around the globe. Mercedes-AMG used these two highly sport models to introduce a new generation of buyers to the AMG performance sports cars. The Mercedes A 45 AMG and CLA 45 AMG are performance versions of the small A-Class and the all-new 2014 CLA-Class four-door coupe. And buyers are responding in a big way.

Tobias Moers, Chairman of the Board of Management of Mercedes-AMG GmbH said, “We are looking back on the company’s strongest year ever. This extraordinary growth has exceeded even our own expectations. It shows once again that with our “AMG Performance 50” growth strategy, we’re on the right track. It’s a strategy we will continue to build on.”

The Mercedes-AMG growth has been made possible by the expansion of the product range and entering the new A-Class and CLA-Class compact segments. With the sporty A 45 AMG, the four-door coupe CLA 45 AMG and the GLA 45 AMG, Mercedes-AMG is offering three new entry-level models. Mercedes has aimed these new cars at customers in their thirties to mid-forties. The new target group is responding in a big way to the new sporty models.

In its three biggest markets US, Germany and UK, the Affalterbach-based company recorded strong demand in 2013, driven by new products. Among the factors driving this growth was the broad introduction of the all-wheel drive 4MATIC, newly developed by AMG with focus on performance aspects. All three models are equipped with the AMG 4MATIC technology and the world’s most powerful four-cylinder production engine.

Where did it all start?

AMG (Aufrecht Melcher Großaspach) was founded in 1967 by Hans Werner Aufrecht and Erhard Melcher. They achieved their initial success in the world of motorsport. Today, AMG employs a workforce of more than 1,200 at its plant in Affalterbach, and over the past 47 years has become the technological spearhead and a wholly-owned subsidiary of Daimler AG.

AMG also offers buyers an introduction sport division, Sport Packages & Models, that provides an entry into the world of AMG performance vehicles. AMG’s performance specialists were closely involved in the development of the A 250 Sport and CLA 250 Sport. The sport models “engineered by AMG” were in high demand in 2013 as well and were handed over to more than 12,000 customers.