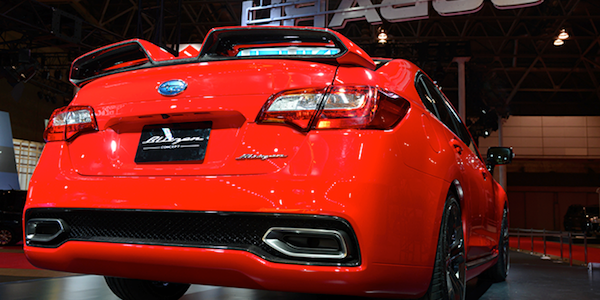 Meet the performance Subaru Legacy that won’t be produced [video]

Subaru likes to tease fans with performance concept vehicles and brought the 2015 Legacy B4 Blitzen Concept to the Tokyo Auto Salon. Check out the video.
Advertisement

The 2015 Subaru Legacy sedan has deep roots in rally racing and setting records as a performance car. Subaru brought the 2015 Legacy B4 Blitzen Concept to the Tokyo Auto Salon to again tease fans with a performance model. Don't look for this performance Legacy to ever make it to production.

The B4 Blitzen Concept is based on the new 2015 Subaru Legacy flagship sedan. The custom Legacy gets a more muscular stance and is based on the design concept of the previous Legacy Blitzen series. It looks good in the "Premium Red" iconic exterior color for the Blitzen series. This Legacy has a wide and low front silhouette and the rear spoiler and dual exhaust says something more powerful should be under the hood. In the cabin it gets piano black finishes and red lines that coordinate with the body color and accent the beige colored quilted leather. Check out the Legacy B4 Blitzen Concept video.

Legacy has roots in Rally racing

The first-generation Legacy was released in Japan in 1989 and the Legacy sedan has its roots in Rally racing. In 1993, Legacy participated in the World Rally Championship and finished in first place at the New Zealand Rally. The first generation Legacy sedan also set records and in January 1989, Legacy took on the 100,000 km FIA World Land Endurance Record outside of Phoenix, Arizona.

CHECK OUT: Why is Subaru Legacy is the longest lasting sedan on the road?

The 2015 Subaru Legacy is still setting records and achieved its best sales ever in January. The Subaru Legacy has a long history of being a performance vehicle and fans would like to see another performance model. The new Subaru Legacy B4 Blitzen is still a concept and it won’t likely make it to production.

Tesla Contemplates A New Strategy for China Retail even As Sales Boom
Jay Leno on Elon Musk & EVs: “I Think He Should Get ... Credit"
END_OF_DOCUMENT_TOKEN_TO_BE_REPLACED