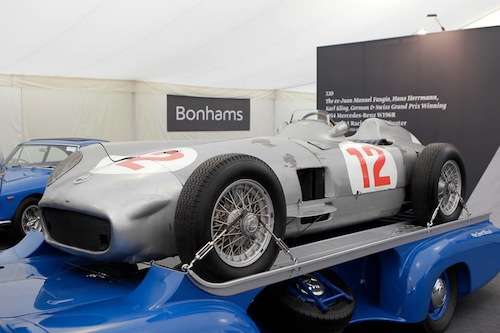 Meet the most expensive used car in the world sold for $31.6 million [UPDATED]

A rare 1954 Mercedes-Benz racer sells for a record $31.6 million making it the most expensive used car on the planet sold at auction.
Advertisement

The price of a used car just went up by a huge amount as a rare Mercedes-Benz racer sells for a record amount. The 1954 Mercedes W196 R Formula 1 racer became the most expensive car in the world ever sold at auction. An anonymous bidder bought the race car that was driven by five-time F1 world champion driver Juan Manual Fangio. The car was sold for a record $31.6 million making it the most expensive used car in the world sold at auction.

This rare car was sold by Bonhams auction at the Goodwood Festival of Speed on Friday. It now holds the distinction of being the most expensive F1 car ever sold and the most valuable Mercedes-Benz in the world. The 2.5-liter straight-eight cylinder engine racer was driven by Fangio to the first successive wins by the Mercedes-Benz F1 team in the German racing crew’s post-World War II comeback.

“The result of the auction just goes to show the exceptionally high level of respect enjoyed by historical Mercedes-Benz vehicles among collectors”, said Michael Bock, Head of Mercedes-Benz Classic. “We would like to congratulate the unidentified bidder on their purchase and will be only too happy to lend them support – if they so wish – during the next stages of their acquisition.”

The previous record amount for a car selling at auction was held by a Ferrari. A 1957 Ferrari 250 Testa Rossa sold for $16.4 million back in 2011. The racer now becomes the highest priced Mercedes-Benz in the world and was purchased by a private buyer over the phone. The price is said to included the buyers premium.

But this 1954 racer wasn’t the most expensive car ever sold. In a private sale last year, a 1962 Ferrari 250 GTO, raced by Stirling Moss sold for $35 million. The famous green car was one of 39 GTOs that were produced from 1962 to 1964. The Sterling Moss racer was sold privately by Eric Heerema, a Dutch-born businessman who lives in England. The buyer was American classic car collector Craig McCaw.

Another famous car sold at Goodwood

Last weeks auction by Bonhams saw another famous Ferrari sell. John Lennon’s 1965 Ferrari GT coupe sold for $543,887 and was his first car. The late Beatle purchased the blue Ferrari after he passed his driving test in 1965 in England. He sold the car three years later. The car sold for considerably more than its pre-sale estimated value of $332,000.

Collector cars are a good investment, and buyers are snatching up these rare cars as they continue to increase in value. Ferrari’s are hot among collectors and there have been a number of big-ticket Ferrari sales in the last two years. According to data compiled by the London-based Historic Automobile Group International (HAGI), prices for classic Ferraris increased 4.82 percent in the first quarter of 2012.

For wealthy individuals looking to diversify their investments, these highly collectible cars will continue to increase in value. For now, the 1954 Mercedes W196 R Formula 1 racer driven by Juan Manual Fangio holds the record as the highest price used car sold at auction in the world. We’ll see how long this record stands.