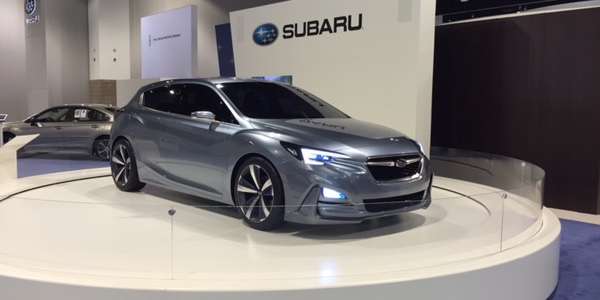 Meet the Man Who Will Get You Excited About Subaru

The all-new 2017 Subaru Impreza arrives in November. Who’s the man behind the new design language?
Advertisement

His name is Mamoru Ishii and he’s the Subaru global design chief who breathed life into the new 2017 Impreza sedan and 5-Door hatch model designs. Subaru has never been known for producing sleek, sexy-looking models, but that is changing. Ishii changed the culture at Subaru by brining in fresh ideas in design and consumers will see the first new model arrive this fall. He wants consumers to take notice of the small Japanese automaker.

The all-new Impreza has been four years in the design studio. Subaru’s new “Dynamic X Solid” is what the Japanese automaker calls the new design language. Consumers will first see it on the 2017 Impreza, and then it will work its way through Subaru's entire lineup from the Forester SUV to the WRX/STI performance cars within five years. Mamoru Ishii is responsible for all the changes. It’s all geared toward getting consumers excited about the brand.

Subaru sales are hot now, but they can’t rely on their old designs to keep the brand moving forward. In an interview with Automotive News, Ishii says, ”We are moving to that next step, aiming for a product that the customer will buy because of the design, a design that has excitement, emotion, one that is solid and dynamic.”

PAGE 2: What's next for Subaru?

Subaru is at a crossroads. They either change their design now, or grow old and stale. Subaru executives know the new design overhaul is crucial to the brands survival in a competitive market. It’s either change now and grow to attract new customers, or slowly become irrelevant. What's next?

"We had very unbalanced models," Ishii said in a May 31 interview with AN at the company's advanced design studio in Tokyo. "The old Subaristas were compromising design for functionality.” Ishii began developing the new design ideas in 2012, months before he took over as general manager of Fuji Heavy's global design department in April 2013. He works out of the main studio in Gunma, near Subaru's factory in Japan. They also have two satellite offices in California and Germany.

Ishii says interior remodels will be next for Subaru. After testing the Tesla Model S, Ishii said he was energized to think of new ways to overhaul interiors at Subaru. That will be the next big push after updating exteriors, he told AN.

The culture is changing at Subaru thanks to Mamoru Ishii. He aims to get you excited about Subaru. The new design language can be seen on the 2017 Impreza compact sedan and 5-Door models that will begin arriving later this fall. There’s a lot more to follow.

Jon wrote on June 17, 2018 - 11:33am Permalink
"Subaru has never been known for producing sleek, sexy-looking models" - GET BETTER GLASSES, Dennis.