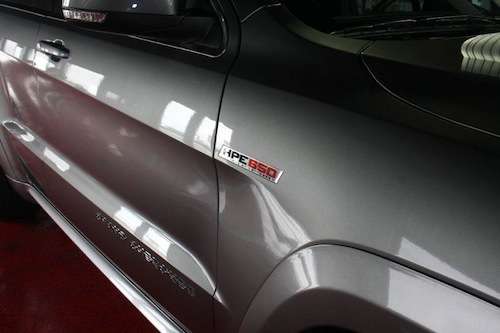 Meet the fastest Jeep Grand Cherokee in the world

Last week we showed the Hennessey 2013 Jeep Grand Cherokee SRT8 HPE650 with the 650 hp upgrade. This week we get to see how fast it goes.
Advertisement

We paid a personal visit to Hennessey Performance in Sealy, Texas last week and talked to John Hennessey about what he does at his performance shop. He talked about some fun things he and his team does to cars and how they make fast cars even faster. We toured the 30,000 square foot facility and got to touch Steven Tyler’s Hennessey Venom GT Spyder with 1200 horsepower. We talked to John about a 2013 Jeep Grand Cherokee SRT8 HPE650 Supercharged upgrade that he recently ran down the company’s quarter mile dragstrip, but he didn’t give us the exact numbers. Just how quick is this 650 horsepower SUV?

When I got home yesterday, there was an email sitting in my inbox with not only the numbers, but a video of John running the Jeep Grand Cherokee SRT8 HPE650 down the Lonestar Motorsports Park dragstrip to see just how fast the SUV would go. He also did a 0-60 run that is impressive. John Hennessey first tests the all-wheel-drive, 392 cu in, 6.4-liter V8 Hemi 2013 Jeep SRT8 with HPE650 Supercharged upgrade, and takes a run down the IHRA sanctioned dragstrip.

The fastest Jeep Grand Cherokee on the planet

Now keep in mind that this Jeep Grand Cherokee is street legal and John says has a suspension and setup that is designed to be driven as a daily driver. He says it doesn’t corner like an SUV, but corners like a sports car. And the blown Hemi produces a great sound as he puts the Jeep through its paces around the test track. The Grand Cherokee sprints from 0-60 mph in a super fast 3.9 seconds, which likely makes it the fastest Jeep Grand Cherokee on the planet.

The fast SUV runs the quarter mile in 12.6 seconds at a trap speed of 110 mph. That makes this blown Jeep faster than a new 2013 Porsche Cayenne Turbo S V8 that will sprint from 0-60 in a very quick 4.5 seconds. John told us that the Jeep Grand Cherokee with the 650 hp supercharged upgrade is being purchased by those who would be buying the Porsche Cayenne Turbo S. Many customers are looking for a SUV that is not only luxurious, but also fast. And this SUV certainly is both.

Hennessey Performance just recently did a dyno test of the fast Supercharged 2013 Jeep Grand Cherokee and it sounds impressive. John said the factory 470 hp SUV will launch from 0-60 in under 4.8 seconds, which puts it close to the Porsche Cayenne Turbo S. But with everything Hennessey does with the upgrade, this is one fast grocery hauler.

This 2013 Jeep Grand Cherokee is likely the fastest street legal SUV in the world. For more information contact John Hennessey at 979-885-1300 or visit:http://www.HennesseyPerformance.com