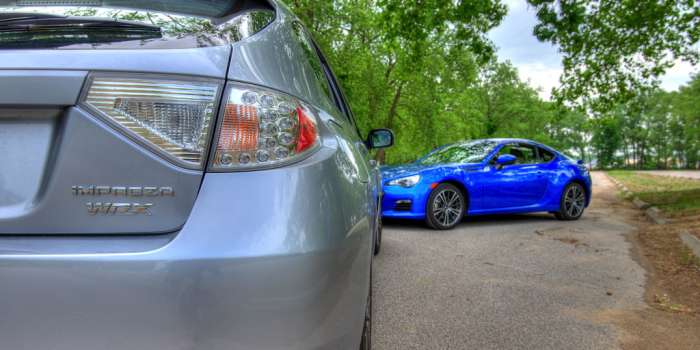 In an interview with a loyal Honda owner, he reveals why he made the switch to Subaru and now owns two, a 2013 BRZ and 2013 WRX.
Advertisement

Many people who own Honda’s, drive them until they need a new one, and then keep the old one for a child and they stay in the family forever. Honda owners are extremely loyal to the brand and have made the Japanese automaker very successful. You probably even know one these dedicated Honda owners personally. Here’s an interesting story of one Honda owner who for reasons that could be called fate, became a big Subaru fan. He now loves Subaru and owns a BRZ for himself, and his wife drives a WRX. He’s even a Moderator at a BRZ owners Facebook page.

Chris Elek fell in love with cars at an early age by spending time with his dad as he worked on cars in the family garage. He bought his first Honda in 1993, a 1990 CRX Si. We were able to interview Chris and here is his story and his take on why he now owns not one, but two Subarus.

Hi Chris, when did your love of cars start?

I had always been in the garage while dad worked on cars but never really had an interest as a kid. Always being mechanically inclined I would repair my own car with dads help. My main interest in the car scene was stereo, so I spent a large amount of time building custom speaker enclosures and adding more deafening noise into the car.

You eventually got interested in performance cars. How did that happen?

This lasted about a year until I met a fellow CRX owner with a strange intake and loud exhaust on the car and he took me for a ride. The car was faster than mine, partially because it did not have 500 pounds of stereo in the back. It was that day my whole outlook changed on cars. I was invited to my local drag strip and got hooked. I then sold all my stereo equipment and bought go fast parts. Having a stock CRX that ran a 16.2 quarter mile time I invested my money into a custom exhaust I welded together myself and an intake.

You have to remember at this time the import scene was almost nothing.  Fast and the Furious did not exist. In 1994 my engine with 185,000 miles started smoking and making bad noises. Since Google did not exist I had to use the next best thing Yahoo. I started searching for engine replacements and performance and ended up on a now no longer existing internet forum hybrid.honda-perf.org.  It was there I read how to replace my 109 HP engine with a newer 127HP engine, so I did!

The next year I took the car to the drag strip with a new suspension from this company called Skunkworks (Now called Skunk2). Took out unneeded weight from the car and was able to run a 15.2 quarter mile with some additional parts from a Jaguar exclusive company called Fidanza, They were local and wanted to get into the Import market offering Lightweight flywheels. I was the prototype tester at the time. Everything went great until my transmission decided it could take no more and exploded on the drag strip.

Was that the end of your racing?

Over the winter of 95-96 my car sat as I sold all my parts out of the engine bay. I saved up for something no one had done in my area. Imported Japanese engines making 170 hp. So in 1996 my car hit the streets with 170 hp under the hood plus a new header and transmission. I had this car all the way to 2001 replacing every piece on the car including the body adding everything I could to it to make it perform better. I was building a completely new engine hoping for an excess of 250 hp.

It sounds like the car was really starting to take shape?

Unfortunately this is where my car days took a turn for the worse and a slight pause. I had replaced every part on this car with exception of 3 items: rear brake calipers, gas tank and brake lines. On October 31, 2001 while driving to work, my car pulled itself into oncoming traffic at 40 mph due to a driver side brake caliper seizing. I do not have any pictures of the car anymore but when your A-pillar is no longer straight and U shaped you can assume it was a bad day. A faulty seat belt helped me get intimate with my windshield to say the least. After three and a half hours, I came to after being life-flighted to Cleveland Metro.

Did this end your racing ambitions?

It was a wake up call, I was 24 with 2 kids and a wife. I took the car I had put thousands of dollars into and sold every piece I had. I ended up with $14,000 for a down payment on a house. Fast forward 8 years I got the itch. I was still driving Honda's just not extremely modified. I needed a new exhaust for my daily driver Honda. So I bought a cheap unit on eBay, a "performance" exhaust.

So you were starting to get the proverbial itch again?

Once I heard it, it was one of those moments you see in the movies where the light bulb goes off in the actors head. I picked up another Honda which had mechanical problems and rust and over a 9 month period transformed it from something destined to be at the junk yard to something nice to drive in the summer. I guess I had an effect on some friends as they are all seeming to get back into cars. My best friend sent me a text to check out this new type of racing.

So tell us how you made the transition from Honda to Subaru?

My friend said, you take a $500 beater and go racing, its called Chumpcar World Series. I said, Sure we can do this,...but they race in the rain. “What can we buy that would work?” he said. One of his co-workers said it should be a Subaru Impreza because it’s all wheel drive. About a year later they both found one for $400 in Pennsylvania and bought it. We raced from Road America in Wisconsin, to VIR, all the way down to Daytona International. We had a blast jumping into a car driving as fast as you can wheel to wheel on a track with up to 100 other cars surrounding us. The car was reliable for the most part and we ended up in the top 10 most of the time but the high horsepower cars just pulled away in the straights. This began my obsession with Subaru engineering and caused me to leave my original love of Honda behind.

So you were hooked on Subaru’s after that?

I thought to myself this is a car I want to own, I already know how to repair the engines and transmissions. I was watching this new concept car from Subaru named the BRZ. In 2012, I put myself on 5 different dealerships waiting lists for this car. In June, I was out for breakfast in downtown Cleveland when I got the call. I told them I would be there in 25 minutes. It was not that I really wanted the car, it was also because I saw it as the revival of the Import tuning scene. When I got there the person whom originally ordered the car for his son decided it was too much car for him. I filled out the paper work for financing while 2 other parties sat in the waiting room to see if my financing would go through because they wanted it. 3 hours later I was driving home my first Subaru, it was my first-ever brand new car.

Why did you decide to buy your second new Subaru?

The wife needed a new car in 2013 so we picked up a Silver WRX Hatch in March. She never even got a chance to test drive it, because we had to special order it. Every day she says she loves her car, I find it amusing and it makes me happy. As the saying goes "Happy wife, happy life". I still have my Honda's in the garage, a 1992 Civic Hatchback and another 1990 CRX Si designated for Autocross, but they only get driven about 2 times a year. I am not saying I won't go back to Honda but the last 2 years have been nothing but a love for Subaru.

You are also involved with a BRZ owners Facebook page, tell us about that.

Shortly after I purchased my BRZ, I was Invited to be a Moderator at the best BRZ owners Facebook page on the internet. We discuss technical problems, theory of what we can do to make the car better and have several owners of well known aftermarket companies like Kartboy and Nameless Performance showing us all the secret spy shots of upcoming products. We get together with our shops and companies to offer bi-weekly contests for free products and advertisement. We want to give back to the community members and support our companies supporting the car we love.

Our sincerest thanks to Chris Elek for being so generous with his time and personal information. At Torque News we place a high value on our readers. We would love to hear your comments on this story. If you enjoyed this interview, please post your thanks to Chris in the comments section below. You can follow Chris on his Money Shift Racing Facebook page at facebook.com/moneyshiftracing.

Note: The Q&A section above is presented in an interview format, but the content was taken from unedited e-mails. Chris’s words were not changed in any way, and he approved this story prior to publication.

Jack wrote on February 21, 2014 - 2:44am Permalink
Don't lie Chris, your love for Subaru really started when we installed an audio system into my 1995 impressa!! I miss that car terribly :(