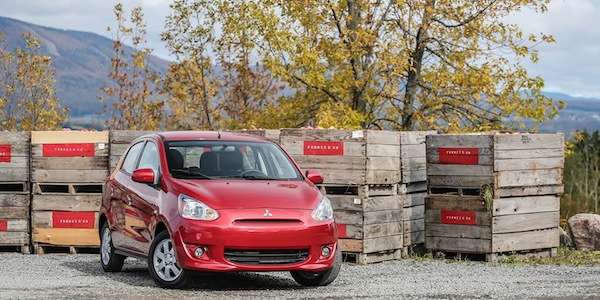 Introducing the most affordable vehicle in the US: 2015 Mirage

The 2015 Mitsubishi Mirage has been named "the most affordable vehicle shoppers can buy" by Cars.com. What cars did it beat?
Advertisement

The 2015 Mitsubishi Mirage DE Automatic was at the top of the list and it’s partly because of it’s low sticker price of $15,115 with options plus destination. The Cars.com editors also calculated five-year fuel costs for each car to help shoppers understand that the sticker price is just part of the true cost of a buying a car.

Mirage beats out all others in its class

Mirage accomplished the best in-class fuel economy by having a low 0.28 drag coefficient because of the Mirage’s clean and aerodynamic exterior styling. It’s powered by a 1.2-liter three-cylinder DOHC engine that produces 74 bhp and 74 lb.-ft. of torque. The engine is the latest version of Mitsubishi Innovative Valve timing Electronic Control (MIVEC) variable valve-timing system that maximizes fuel efficiency and power output while reducing emissions.

Joe Wiesenfelder, Cars.com's Executive Editor says, "Shoppers face legitimate sticker shock when shopping for a new car. While advertisements often lead shoppers to believe that cars are quite affordable, the reality is that the price of entry for even a modestly equipped new car is well above what many shoppers expect. That's why we've devised a list of not just the most affordable cars for sale, but which cars are the most affordable to buy and own."

The new 2015 Mitsubishi Mirage is not only highly fuel-efficient, but its also affordable to buy and own. The fuel-stingy five-door sub compact beats all others in this class and is the most affordable car in the U.S.