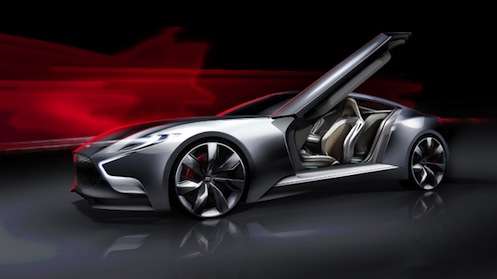 Hyundai Motors has unveiled a luxury sports coupe called the Concept HND-9 that could be a preview of the next-generation 2016 Hyundai Genesis Coupe.
Advertisement

As the New York Auto Show gets all the attention of the auto world, Hyundai Motor Group, one of the fastest and most progressive automakers in the world has unveiled an image of what could be the next-generation Hyundai Genesis Coupe. Although they wont’ be bringing the luxury sports coupe to New York, they will reveal more details at the 2013 Seoul Motor Show that will run from March 29-April 7. The Concept HND-9 hints at Hyundai’s next-generation luxury sports coupe design and it’s a stunning example of what Hyundai plans for the the 2016 Genesis Coupe or possibly a completely new performance luxury sports coupe.

Hyundai is on the move

Hyundai is keeping tight-lipped about the new Concept HND-9 luxury sports coupe, but this could be our best preview of what the 2015-2016 Genesis Coupe design will look like. Hyundai Motor Group’s R&D design center is located in Namyang, Korea and has come up with the exterior rendering of the luxury sports coupe concept. In a bold move, Hyundai recently announced that Peter Schreyer was appointed as President to oversee Hyundai and Kia's design centers in order to “strengthen its competitiveness through qualitative growth.” Schreyer brings a wealth of experience in design to Hyundai from the global auto industry and will definitely help launch the South Korean automaker to new heights.

Hyundai Motor Company is the fastest-growing automaker by brand, and we are seeing they have plans to be competitive not only in the compact car and SUV markets, but also the highly competitive luxury performance car segment. Hyundai Motor Group which includes Kia Motors, has a goal to be one of the leading global top automakers. Both Hyundai and Kia have come a long way in terms of design, under their own unique design philosophies, and the new Concept HND-9 shows just what the design team at Hyundai can do. There will be some exciting new cars coming from Hyundai in the future.

The HND-9 represents an evolution of Hyundai’s fluidic sculpture design philosophy as they attempt to enhance their brand value around the globe. "Strengthening our fundamentals, especially in the area of design, is imperative to secure long-term competitiveness," said Woong-Chul Yang , Vice Chairman of Hyundai Motor Group's R&D Center in Korea. "Design is not just the most visible aspect of the car, but it's an area customers have a strong emotional connection to. It is at the center of our efforts to enhance our brand value. "

The new concept brings a premium look to the Hyundai brand and puts it up there with some of the top luxury brands. It’s beginning to be clear that Hyundai’s long-term design strategy will include more high-end luxury vehicles. The HND-9 Concept features a long hood and wheelbase that is representative of other classic premium high performance sports coupes.

Hyundai has told us that the new luxury sport coupe will feature rear-drive configuration and will be powered by a 3.3-liter turbocharged GDi engine and eight-speed automatic transmission. The V6 engine will deliver a maximum output of 370ps (362 horsepower). This gives a good idea of the next-generation Hyundai Genesis coupe and the drivetrain that will power it.

The futuristic luxury coupe is not that far away from being a production vehicle as Hyundai will likely put the next-generation Genesis Coupe in production in 2016. The Hyundai HND-9 Concept luxury sports coupe is set to make its world debut during Hyundai’s press conference on March 28th at the 2013 Seoul Motor Show. The South Korean automaker will reveal more details of the concept’s design and its cutting-edge technologies at the show.

Mike wrote on March 21, 2013 - 3:01pm Permalink
Its still going to be a hyundai. After trying a few of their new vehicles I see them moving in a more up-scale direction but they truly don't come close to the Germans or even Japanese offerings. Quality of the build and the driving dynamics have not been dialled in the same way. Some might disagree but I'd recommend you drive a genesis and 135i back to back and see for yourself and feel the difference. Good of Hyundai for continuing to "drive" forward, at least its a pretty shell......

Tesla Contemplates A New Strategy for China Retail even As Sales Boom
Jay Leno on Elon Musk & EVs: “I Think He Should Get ... Credit"
END_OF_DOCUMENT_TOKEN_TO_BE_REPLACED