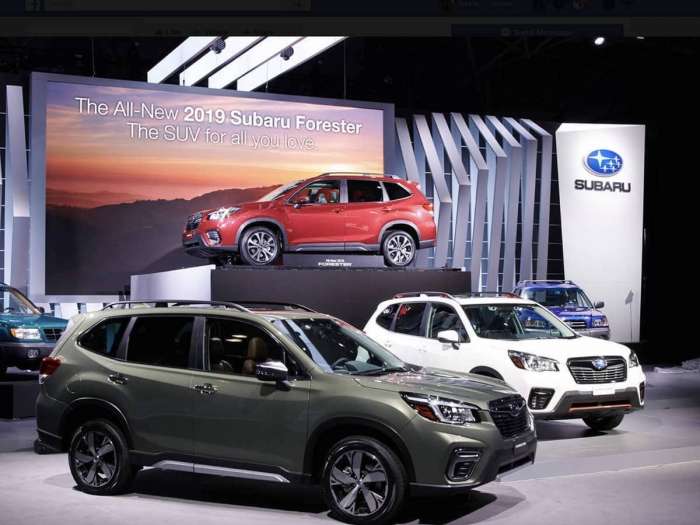 Subaru is at greater risk because of the Trump Tariffs. See how they impact Subaru customers more than Toyota, Nissan, Honda.
Advertisement

Subaru is at a bigger risk than all other Japanese automakers because they are more dependent on U.S. and Canadian customers. If the new Trump Tariffs go into effect, Subaru will need to keep the pedal down in North America or risk losing valuable ground they’ve gained the past nine years. Automakers like Subaru Corp may be forced to spread price increases from 25 percent tariffs across their entire model lineup.

Subaru is outperforming all other Japanese automakers in North America in the percentage of growth, but that could end if they have to raise prices on the all-new 2019 Ascent 3-Row, Outback, Forester and popular Crosstrek nameplates. This will happen as Subaru of America will be forced to spread the additional cost ($5,800 per imported vehicle).

According to analysts at Baird Equity Research, even US-built cars will have some added cost. Analysts predict the average cost increase will be around $1000-$4000 $4,000 per vehicle sold by automakers like Subaru with a mix of locally produced vehicles and imports.

A report from Bloomberg, says Subaru is at even greater risk, because they rely on revenue from North America more than any Japanese automaker. Subaru gets 67.7 percent of their total global sales from North American buyers, Honda is next at 52.5 percent, Nissan 48.9 percent, Toyota 35.2 percent, Mazda 32.1 percent and Mitsubishi 16.1 percent.

As a new round of trade talks take place today in Washington, Subaru along with Toyota Motor warned about repercussions from a potential U.S. auto import tariff earlier this week. “It’s a fact that there would be a big impact from a U.S. tariff increase,” Subaru Corp Chief Financial Officer Toshiaki Okada said at a briefing in Tokyo. “We’re studying what the impact might be but there are too many unknowns at this point, so we want to refrain from giving a specific figure.”

Another report by OPB.org says jobs in the State of Washington are also at risk. Port of Vancouver CEO Julianna Marler said about a quarter of the nation’s Subaru fleet are unloaded at the port. But a new set of auto tariffs is making port leaders uneasy. Marler says the 25 percent tariff on imported cars would have a huge impact on Subaru, one of the port’s biggest clients.

Ed B wrote on August 9, 2018 - 12:32pm Permalink
Ouch! Auto tariffs don't make sense and really aren't the biggest contributor to trade deficits. In this case, they will punish foreign manufacturers with U.S. plants and ultimately hurt U.S. workers - not a well thought out approach from the current administration. Japan, Germany - national security threats, really?
MB wrote on August 17, 2018 - 12:57pm Permalink
Seriously? This has nothing to do with security threats. It has to do with protecting our manufacturers and building our country back up. I don’t want this to affect the auto industry either, but I don’t want to become dependent on others either.
Mark wrote on August 21, 2018 - 7:41am Permalink
25% tarrifs on Chinese electronics is not protecting companies that manufacturer on the USA. Every supplier no matter the country origin is manufacturering a majority of their electronic parts in China. Many cannot be sourced to USA manufacturers, they don't exist, this is about 40 years too late and only a tax on American consumers. Orange blowhorn just likes the attention and conflict, he has no big picture strategy... (I work for large tier 1 auto supplier)
MP wrote on August 22, 2018 - 7:38am Permalink
Damage was done in prior years..any changes to help get us back on track are not all going to be positive. I grew up when textile plants supported many of the American families and all that's left now are abandoned mills. I could say plenty, but I'm not going to make a political war out of this....their are groups out there that are already doing that. Just think you should leave "national security threats" out of this.