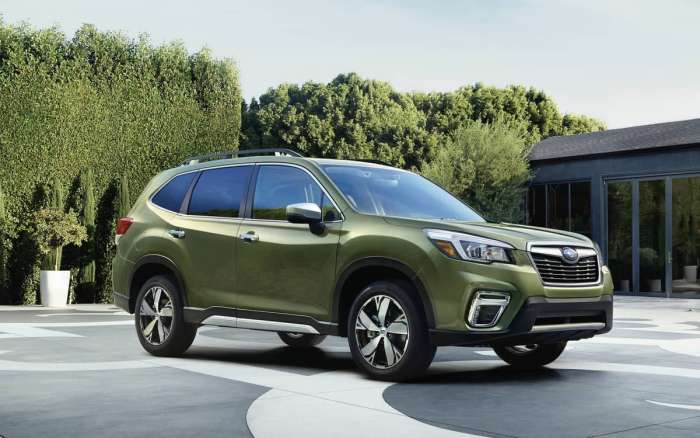 Import auto tariffs could add $5,800 to a new Subaru Forester, Crosstrek, and WRX/STI. See how it could affect U.S. sales.
Advertisement

According to a report by the Alliance of Automobile Manufacturers, a 25 percent tariff on auto imports by the Trump administration would increase the cost of every vehicle sold in the U.S. That means a Subaru Forester, Crosstrek and WRX/STI could cost $5,800 more than it costs now.

This week, the Alliance of Automobile Manufacturers said a 25 percent U.S. tariff on imported passenger vehicles, if imposed on national security grounds, would cost American consumers $45 Billion annually (based on 2017 auto sales), or $5,800 per vehicle.

Subaru produces the Forester, Crosstrek, WRX/STI and BRZ sports coupe at their Japan factory, while the Outback wagon, Legacy sedan, Impreza compact and the all-new Ascent 3-Row family hauler are built at their U.S. plant in Lafayette, Indiana. Toyota Motors says its Camry sedan, made in Georgetown, Kentucky, would face $1,800 per vehicle in increased costs.

The Alliance of Automobile Manufacturers, says it will file written comments this week with the U.S. Commerce Department. The group says consumers would also face higher costs of imported auto parts when buying vehicles from both U.S. and foreign automakers.

The report says the automotive research firm LMC Automotive projects a 25-percent tariff on imported vehicles would reduce U.S. auto sales by 1-2 million units annually, depending on how tariffs are passed on to consumers. This comes as Subaru gets ready to launch their all-new fifth-generation 2019 Forester this fall.

Ed B wrote on June 28, 2018 - 9:01am Permalink
Ouch - that could be a nail in the coffin for the new version, it simply isn't compelling enough to pay significantly more. Subaru should get an exemption since the majority of their car lines are built in the U.S. and they contribute to our job growth.
Tony wrote on June 29, 2018 - 10:23am Permalink
Buy only only American made, that desrtroys my chances for a new Forester, Trump is nuts, the truly rich can only afford a new car now He going to destroy the middle class dr
Dana wrote on July 5, 2018 - 12:36pm Permalink
"since the majority of their car lines are built in the U.S." Keep in mind.. those models are *assembled* in USA.. with parts imported from Japan. I havent seen a good breakdown of how much of their cars are made in USA. Thats why its so easy for them to have these 0 landfill factories here.
Geof wrote on June 30, 2018 - 5:04pm Permalink
Trump is leveling the playing field. This is negotiation to get other countries to stop their high tariffs on our products. Keep calm and drive a Subie. Blame his predecessors for being weak on protecting our workers.
Dana wrote on July 5, 2018 - 12:37pm Permalink
right.. it could very well be a temporary thing to make the playing field level through heavy pressure.. only doing what they do to us.
marc wrote on July 26, 2018 - 2:03pm Permalink
does this mean that 2019 subaru forester owners are going to get the same deal that midwestern farmers are going to receive as a result of tariffs? namely, is the government going to reimburse us for this $5,800 additional expense resulting from the tariffs?
Dana wrote on July 26, 2018 - 5:49pm Permalink
Its interesting as the left calls it a bail out when its just money we got by putting new tariffs on their crap being diverted to the people hit with tariffs in retaliation.. just moving money around.
Mike Gentry wrote on July 31, 2018 - 8:54am Permalink
Is Subaru going to pay the tariffs on the new 2019 Forester or not. My daughter is waiting on what is going to happen. For $5000 plus more. To much , To Much. Won’t be worth it!!

LG's New EV Battery Plant Is a Welcome News for Tesla
Tesla Giga Berlin's New Hurdle: It's Not Only the Gov't, but Now Tesla Itself
END_OF_DOCUMENT_TOKEN_TO_BE_REPLACED